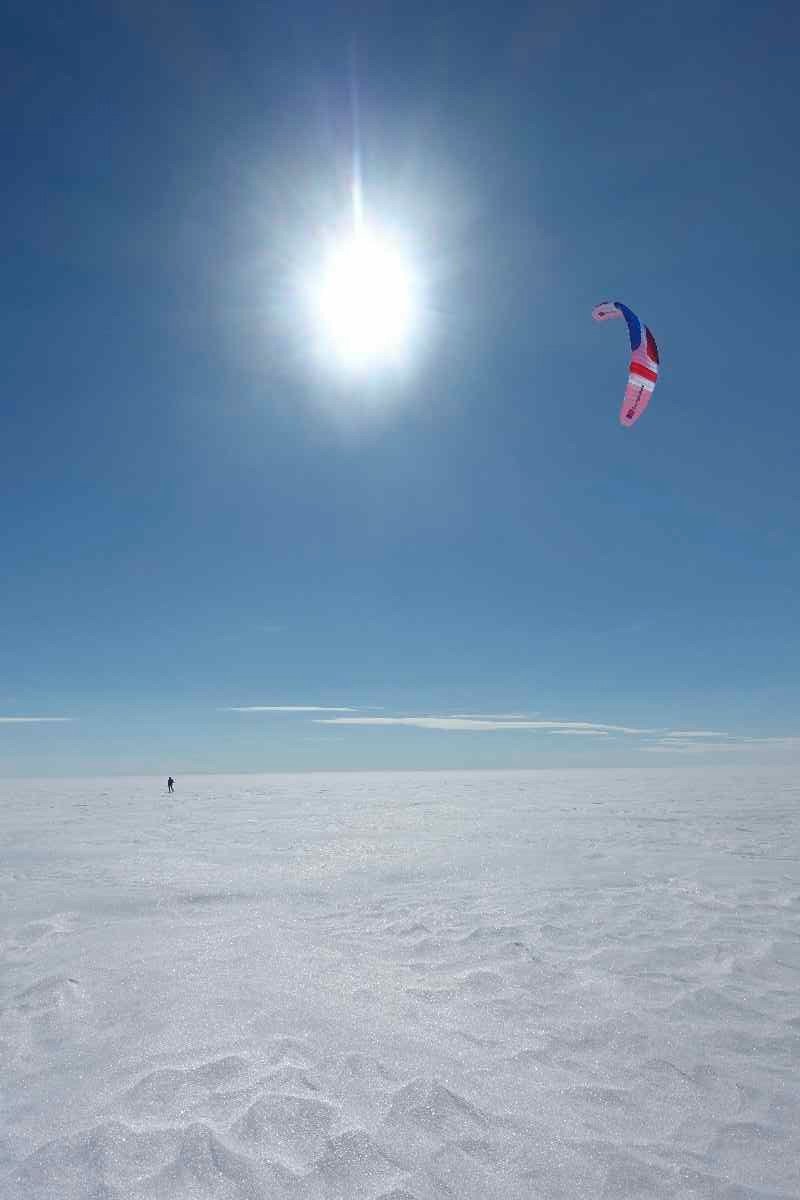 Rare sight on this trip of the sun and a snowkite

So yesterday was a turning point for our trip from a race to get the early plane to a more leisurely cruise to the end of the ice cap in the next 4 or 5 days. It was also literally a turning point today when we made our one and only turn of the trip, Westward towards Qaanaaq.

There was so much joy at having made a turn that we immediately set up camp to celebrate. With our new relaxed approach 106km seemed enough for today. And what a day, the sun came out early on, and there was enough wind to move us forward, but after 17km the wind dropped to about 4mph, so we took a break.

Boredom kicked in after half an hour and I decided to see what it was like to snowkite without the pulk. Now the Ozone Chrono is such a high performance kite that in the 5 or 6 mph wind, I managed to do 20 mph and still not lose any ground to wind.

I was a bit spooked though as although I only went about a kilometre away, it felt very alone without my pulk and Leo who I could make out as tiny dots in the distance. When I got back to Leo, I cautioned about him having a go, why? he enquired, well it is so much fun you will never want to hitch those blue anchors (pulks) back on. But before he could give it a go the wind picked up again and off we set, us and the anchors.

The surface snow soon got deeper and we found ourselves ploughing at about 15mph through 40cm of fresh wind blown powder in the sunshine. Now this is what we came to Greenland for, it was like riding on a tray of icing sugar. For the first time in the trip Leo stormed ahead and despite trying all the tricks I know I couldn’t keep up, losing about 100m per km. I radioed him to see what his depower trim setting was on his kite, but instead of a sensible response he just responded that I might have eaten too many pies…I pointed out that my pulks were covered in snow while his were clean. I am very suspicious that I have been carrying the bulk of the equipment; tomorrow we will have an audit before we set off.

In the meantime here are our top tips for snowkiting in Greenland:

• Do not kite too close to one another – tangled kites are dangerous and prone to damage. We use radios or hand signals to communicate with each other if needed.

• The sun kills the wind – kite at night, sleep during the day. The katabatic winds are at their greatest speed when the air temperature difference is large.

• Beware of wind speeds much higher just above the surface particularly when using long lines. Due to the friction of the surface the wind speed can increase significantly 20 or 30 metres above. We are only aware of this when we have launched our kites and they are trying to drag us into the air.

• Landing the kites in sastrugi (wind formed ridges of snow) can cause the lines to get hooked and make relaunch impossible – pick a flat landing area if possible, or keep kite in the air.

• Sastrugi could represent up to a third of the surface conditions. This will be very punishing on our knees and feet as well as turning the Pringles to dust.

• For a large part of our journey the sun will not actually set below the horizon so we can kite without torches 24 hours a day.

• In crevassed areas snowkiting roped up and towing the other team member is safer and more controllable, particularly downhill at the end.

The Beginner’s Guide to Walking and Hiking

Introducing The Flock Together Collective