Team now faces a race against time to complete the climb. Weather and rock conditions in the final section will prove crucial.

After bad weather severely hampered communications for several days, Leo Houlding has just managed to send out a series of emails and text messages from Greenland, providing updates of his expedition to the Mirror Wall.  Despite the challenges that they have faced, Houlding and team have successfully established a port-a-ledge camp on the north west face and have started to tackle a line on the main headwall. 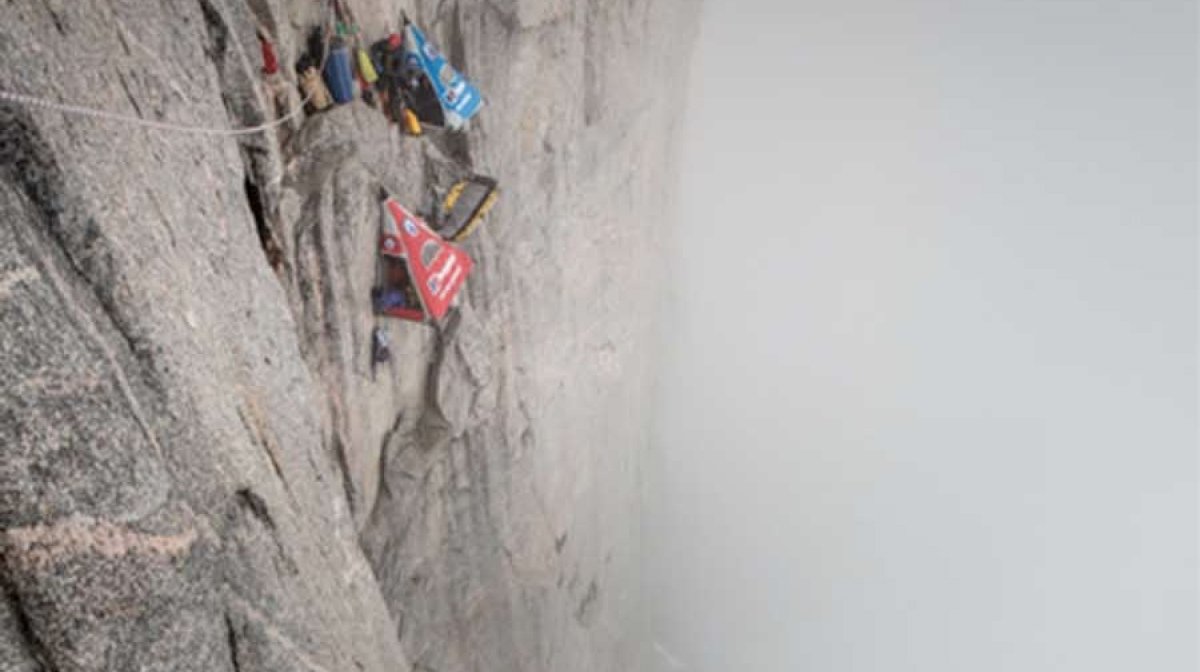 However, the climb is proving to be hugely challenging.  Combinations of extremely thin and loose sections, and some very technical climbing, have made progress slow, difficult and dangerous.  With their helicopter pick up from the surface of the glacier scheduled for Houlding’s birthday on 28 July, the team now has only about four days to climb the final 400m.  Any more bad weather could also obstruct their efforts.

After being dropped off on the Edward Bailey Glacier on 25 June, Houlding, along with Joe Möhle, Matt Pickles, Matt Pycroft and Waldo Etherington, first established a base camp, and then an advance base camp at the foot of the Mirror Wall.  In the process, three of the team were struck down by diarrhoea and vomiting, slowing down the whole expedition.  Once they had scoped out a potential route on the unclimbed north west face, the team set up a hanging port-a-ledge camp (the Bedouin Camp) on the wall and started the serious climbing.  As of 19 July, and despite setbacks and at least one fall, Houlding and team still believe that they can complete their intended route.

For Houlding, the Mirror Wall is his first major expedition since becoming a father, and that has given him a very different perspective on life in the vertical world.  While away, his daughter Freya has celebrated her second birthday, which he spent tackling one of the most crucial sections of the climb.

“This feels different.  It’s my first mission as a dad and I notice a clear change in my heart. Although out here life is very much day to day and most concerns are the immediate ones, deep inside I know my thoughts reach far beyond the snow slope or blank section I’m facing, back to the rolling hills of the Lakes and for decades into the future as a doting father.”

“I’m definitely more risk averse – I’m extremely conscious all the time about the countless hazards my friends and I are facing, with more thought for potential consequences of things going wrong.”

“And that is so far keeping us safe and on track, although heavily off schedule!”

“We have some big days ahead of us, but if we make the helicopter flight out of here on time with the summit behind us and loved ones ahead, there could be no better birthday present for this besotted absent father.”

The Mirror Wall team has sent back a series of brief updates and longer diary entries, which can be found in our blogs.

Introducing The Flock Together Collective