‘How quickly I should get back to strenuous exercise after radiotherapy and chemotherapy?’

The doctor looked at me closely.

‘Your body will let you know’

My cancer problem in 2017 had led to Victor Saunders and I postponing our planned Himalayan climb until October 2018. Chemotherapy does seem to drain the body of energy so, uncharacteristically, I felt I should be a little more structured that usual with my fitness preparations.

In line with the doctor’s advice, I thought I would listen to my body and start with a little gentle dog walking.

From Cancer to the Himalya 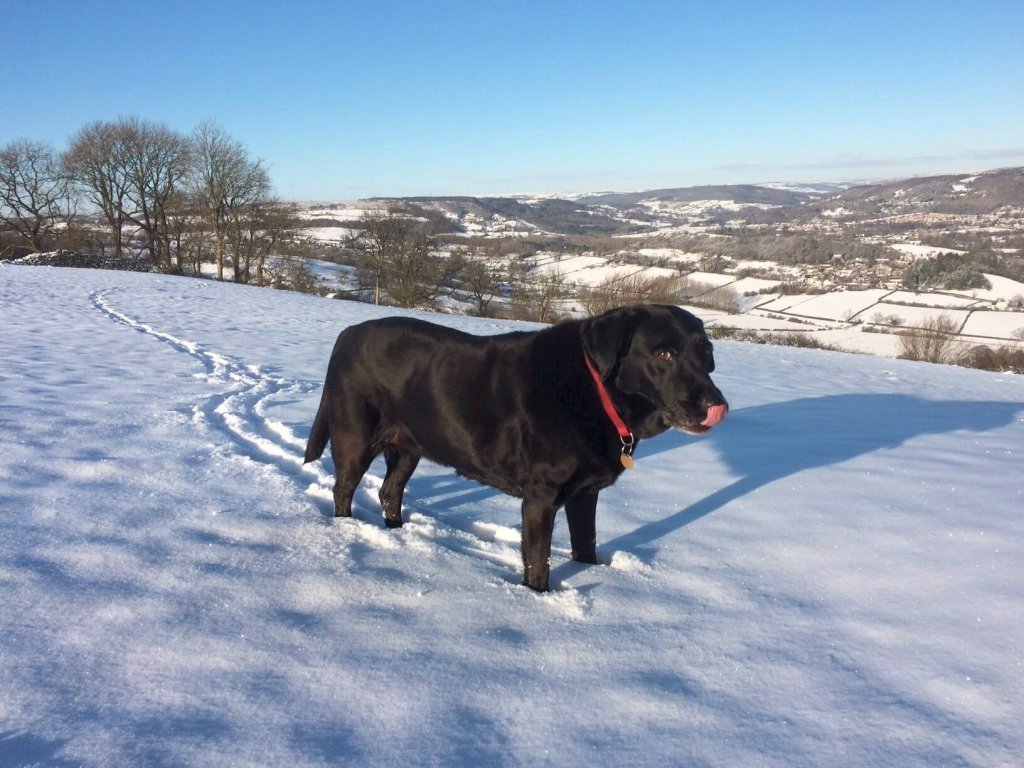 Dog blissfully unaware of the adventure that lies ahead.

Jug Hole wood near Matlock seemed a suitable spot but after not very long a problem had arisen. Our 12.5 year old Labrador had disappeared!

Seconds before she had been snuffling about in the depths of the huge entrance to Jug Hole caves but now she was no longer to be seen… The 7 metre vertical shaft leading into the lower series was the only possibility I could think of.

The caving guide recommended a rope. Without one and with no light other than my mobile phone the climb down was tricky and not being helped by warmer air steaming up my glasses. 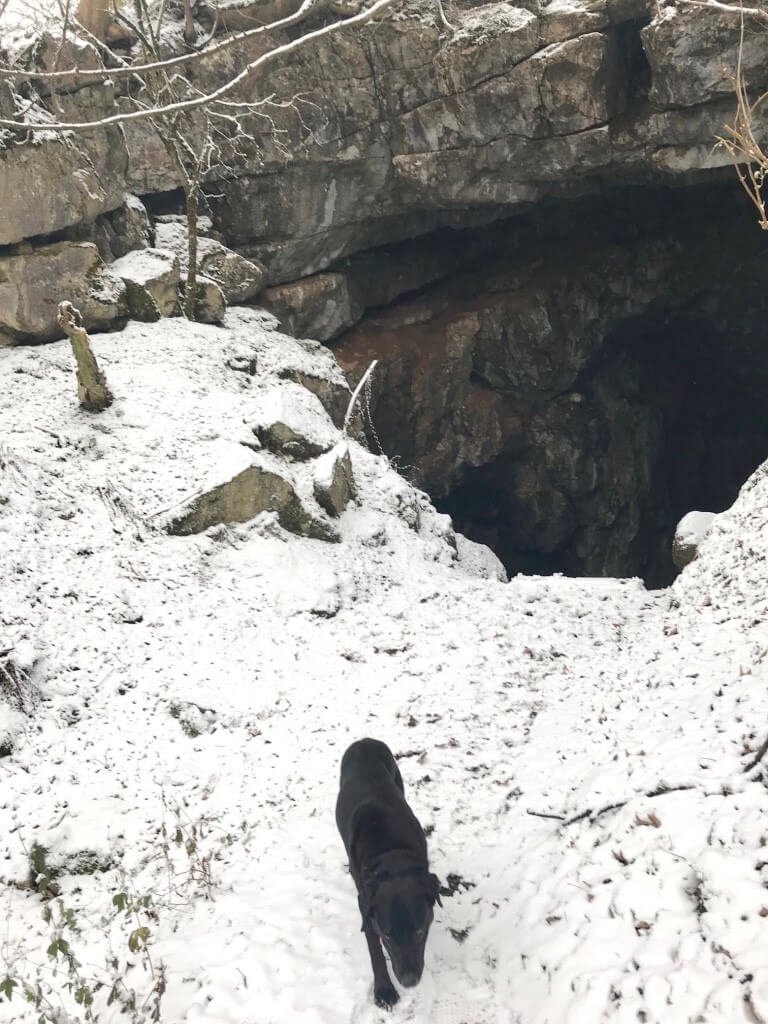 Dog and danger. The shaft she fell down is inside the main cave.

The shaft led to a low horizontal tunnel where a pair of eyes glinted in the dark. Remarkably a vertical fall of 7 metres had resulted in a terrified dog but no obvious damage.

The problem now was how to get a 30Kg dog back to the surface. Phoning home for a rope seemed a good idea but there was no signal. I could climb out and phone but then the dog might wander off into the cave system and fall again.

I reviewed the possibility of climbing out. Perhaps if I was able to keep her on my shoulders I could use my body to fill the shaft below her and just kind of push her up and eventually over the final capstone. It was worth a try.

30Kg is quite a weight to back and foot with, especially when the 30Kg package in question keeps struggling violently. The smart jacket I was wearing pushed hard against the mud and rock wall and my walking boot clad feet smeared awkwardly against the far wall. The phone held between my teeth dimly illuminated the scene. It all felt terribly precarious. Perhaps sensing this the dog shat all over me.

At least it was reassuring to recall that before telling me that ‘my body would know’ the doctor had told me my immune system, weakened by chemotherapy, should be more or less back to normal now.

Initially the walls were fairly close together and I could brace myself in a secure position. Soon though the shaft began to widen and it was necessary to ram the dog’s top quarters into depressions in the sidewall to take some of the weight while I udged up.

The wider back and foot position and lack of good footholds made things far more strenuous and far less secure than before. The wider shaft also increased the possibility of the dog falling past me. 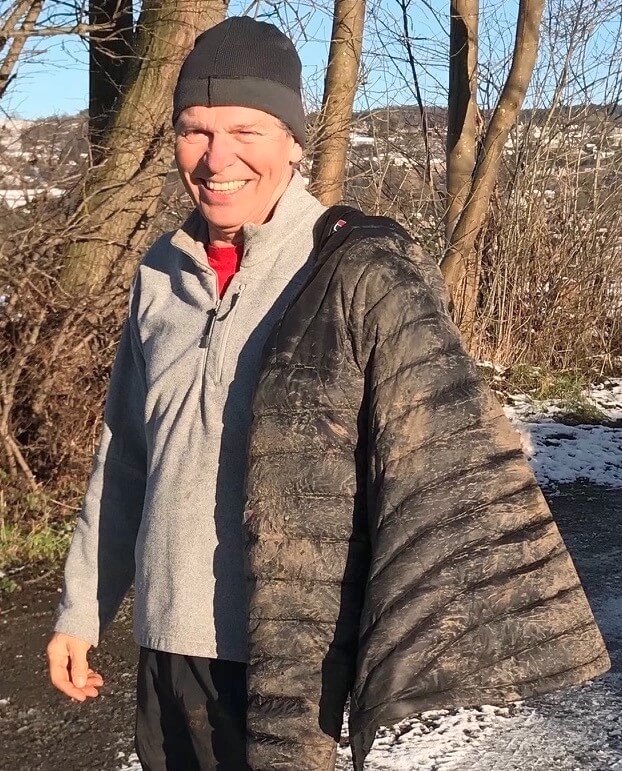 Muddier and smellier than after a usual dog walk. Passers by kept asking
me if I was ok! Fortunately Berghaus kit cleans up well.

The exertions necessary to push a panic stricken 30Kg dog over the final overhang were of Himalayan proportions and left me gasping uncontrollably.

I was absolutely knackered. It was by far the heaviest breathing I had done since my treatment started.

With a signal now I phoned home.

‘The poor old dog seems tired today. Could you pick us up please?’

The detail could wait until later. 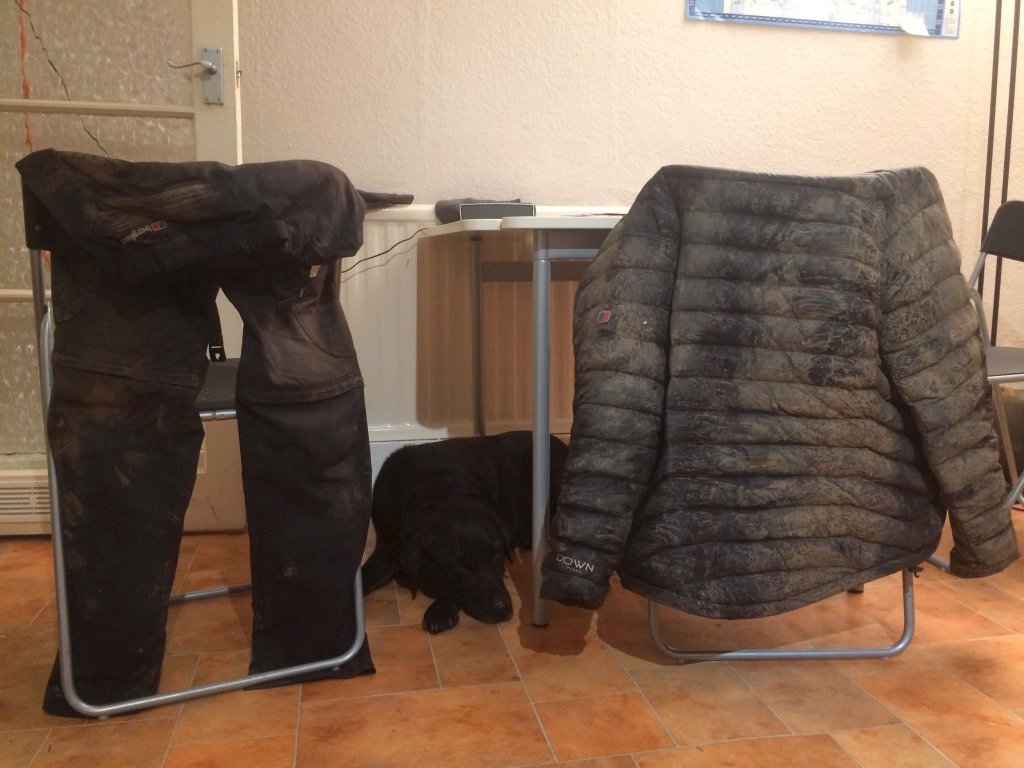 Gentle dog walking had been an excellent start to my Himalayan fitness programme. Only 9 months to go.