So, we have asked Ordnance Survey to put together a quick and simple guide on how to read a map and use a compass.

Throughout the blog you will find great advice on this very important skill plus a section on the most common mistakes (don’t forget to share this article with that friend who is always getting lost).

Being able to read a map is an essential life skill if you plan on spending time in the hills. Although phones have GPS and countless navigation apps, it is important not to rely on them as your sole source of navigation. Phone batteries can run out, or you may be stuck somewhere remote with no phone signal – in these scenarios being able to read a map would be more than useful. Here’s a simple guide to getting started…

How to read a map

Most maps use symbols, rather than descriptions, to show where things are. This is to avoid the map being crowded with writing, making it harder to read. Most maps have a legend for you to refer to, so you know what you are looking at.

The legend will explain which symbols, colours and shapes represent roads, footpaths, woods, buildings, rivers, streams, and much more.

A word about scales

Maps are shown in different scales (for example 1:25k or 1:50k). The larger the map scale, the more detail that will be shown on the page, and the smaller the scale, the less detail will be shown. You would need to pick a map of a scale that is appropriate for what you need. 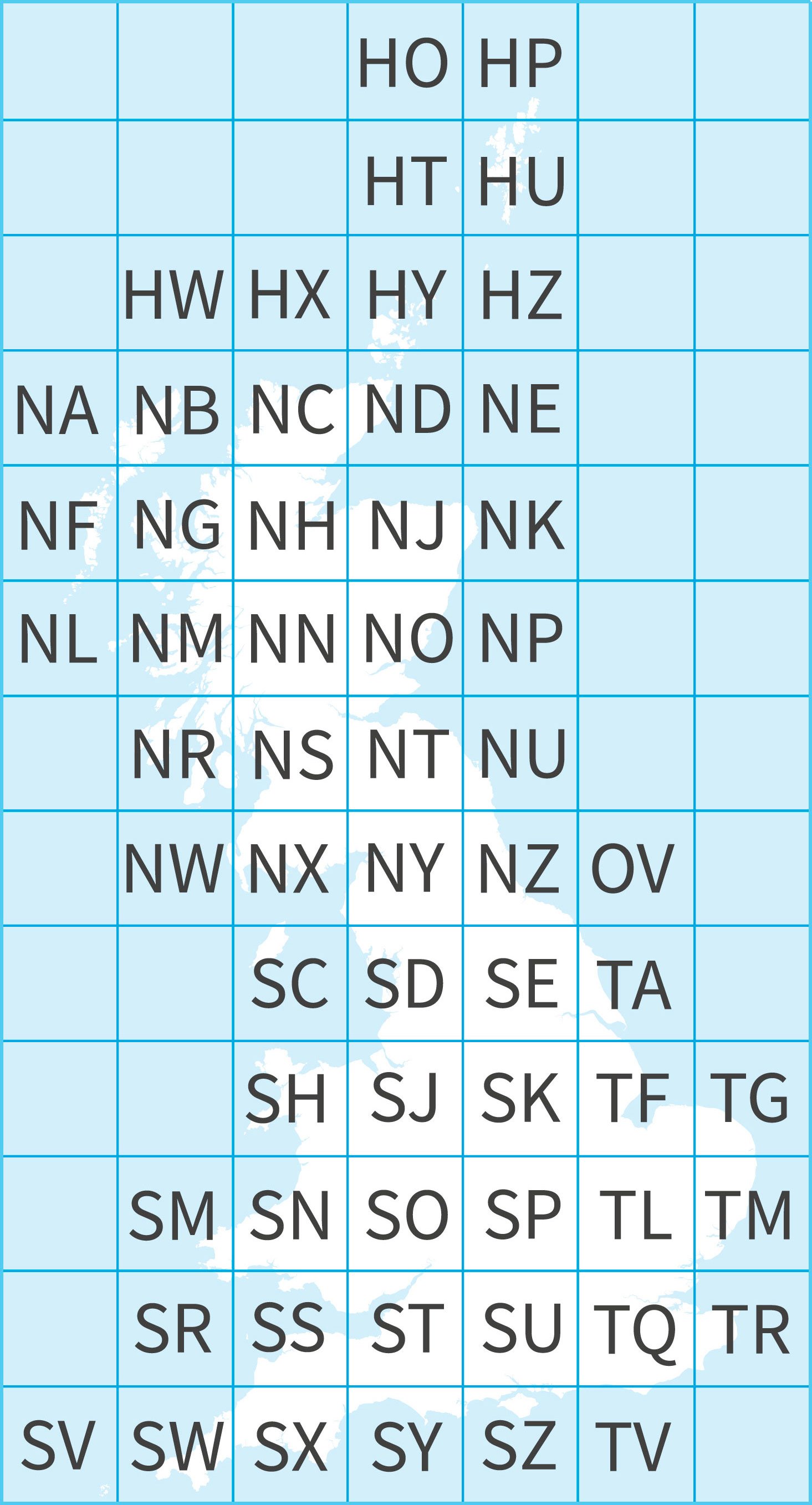 OS maps all have two letter prefixes, which divide GB into 100km squares and each square is given two letters. When you quote your grid ref number, be sure to include the two-letter prefix, so that the grid ref corresponds to the correct square.

OS maps are covered in faint blue lines which make up a grid. Each grid square has associated numbers, and these numbers are what you use to pinpoint your location on a map. This is useful for being able to simply give others your location (e.g. mountain rescue).

Working out a grid reference

To work out a 4-figure grid reference, always give the eastings number first and northing second. Lay the reference out as per the example shown. 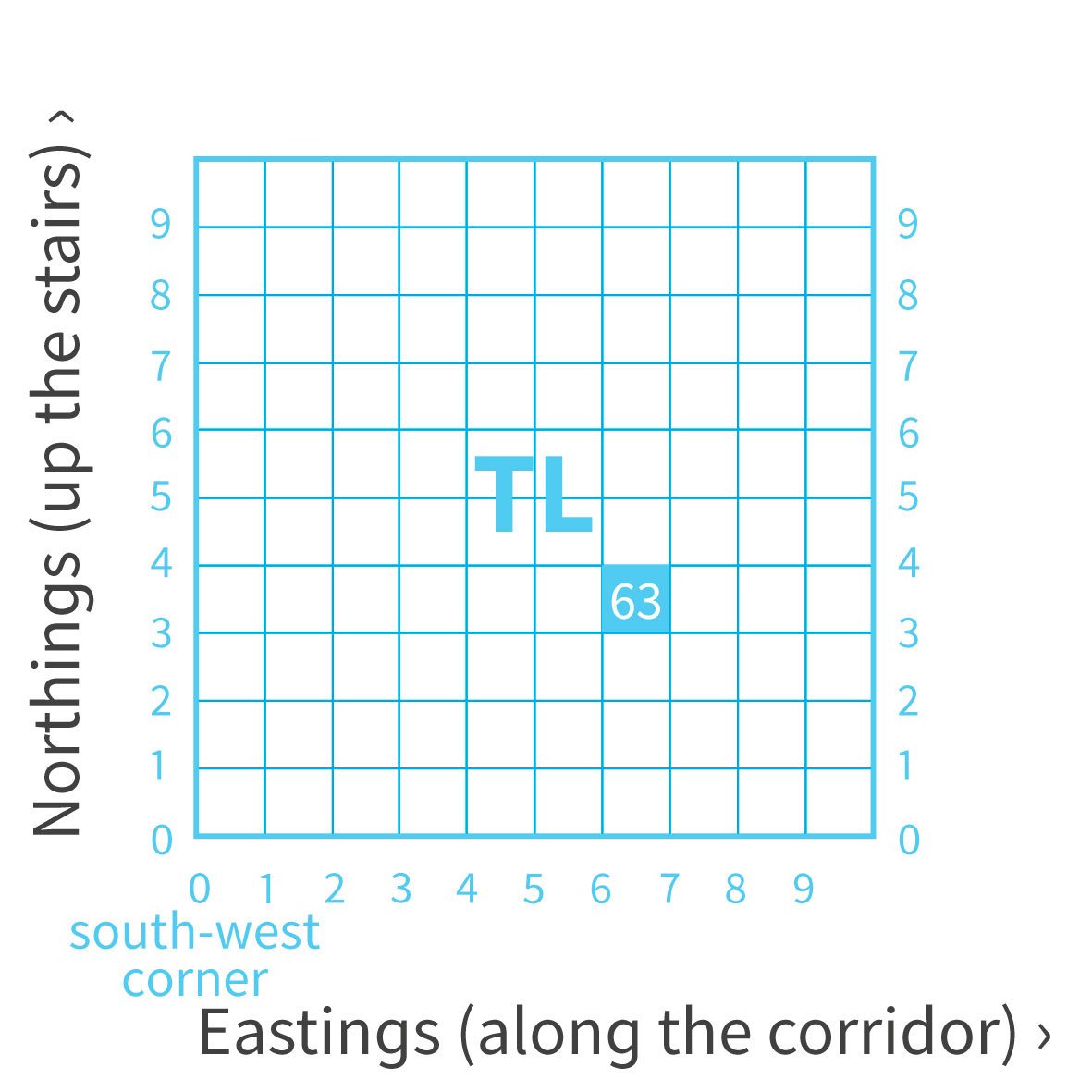 Contour lines are orange or brown squiggly lines, with numbers next to them. The lines represent the contours of the land, and the numbers tell you the height each line is above sea level. The closer together the contour lines are, the steeper the slope. 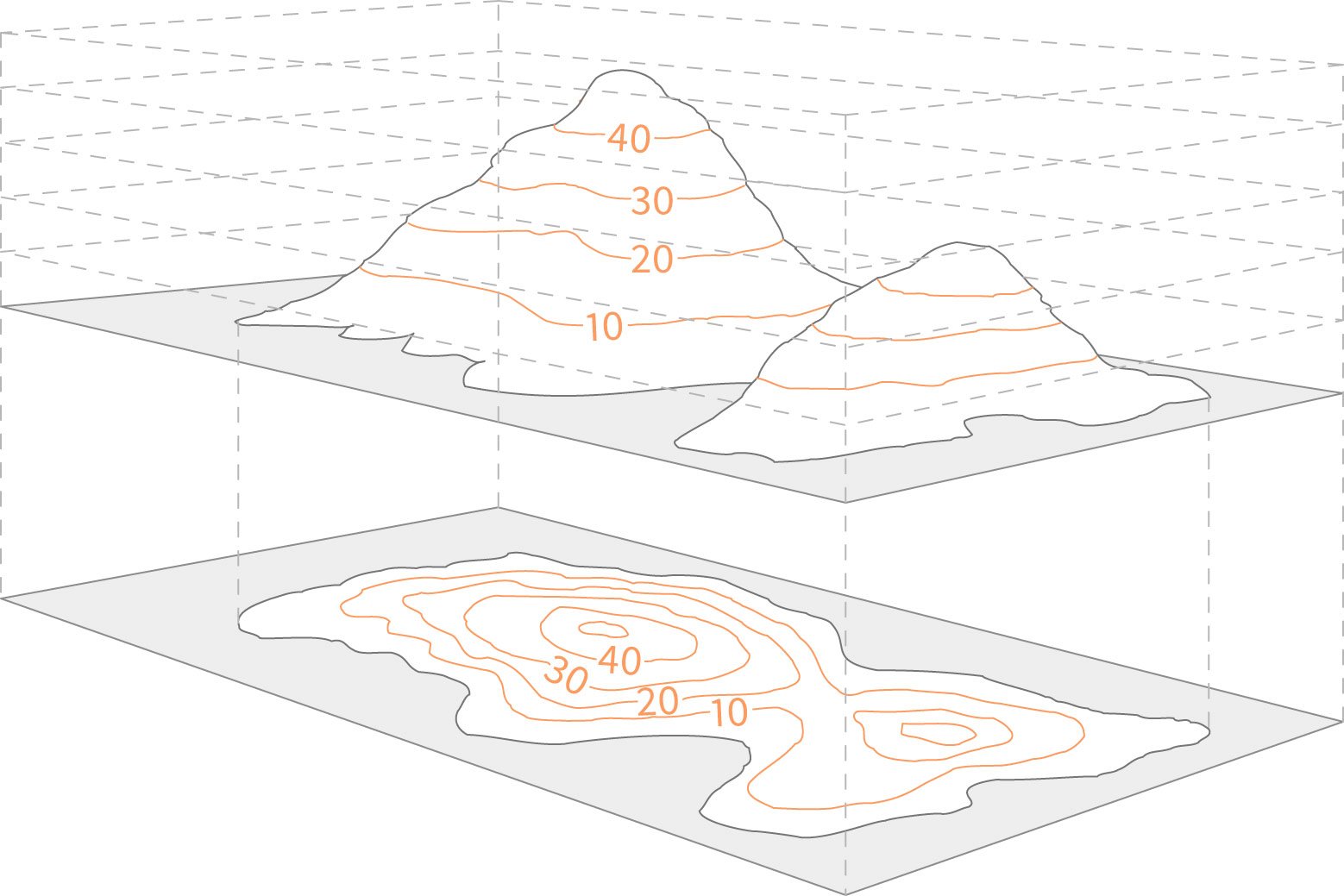 These lines are useful, as if you are planning a route, you can get a good picture of how steep it will be so that you are prepared. On most maps, the interval between contours is usually 5 metres, but in mountainous regions it may be 10 metres.

Top tip: practice comparing a map to the real world or a photograph, to get a good indication of how contour lines represent the real world.

Most people use baseplate or orienteering compasses, which are good for accurate navigation with a map. 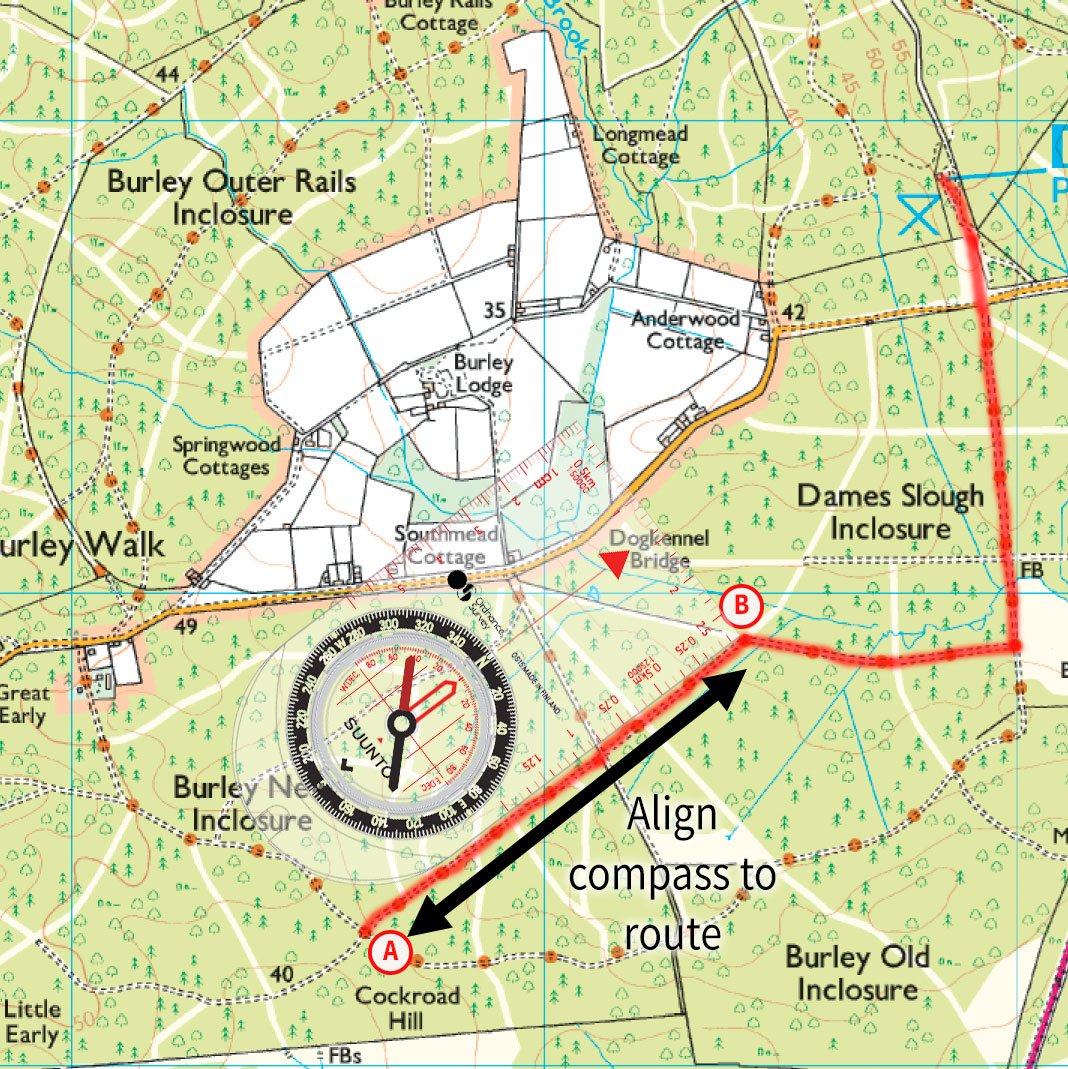 1. Line up the direction of travel arrow so that it is pointing from where you are starting to where you want to go. 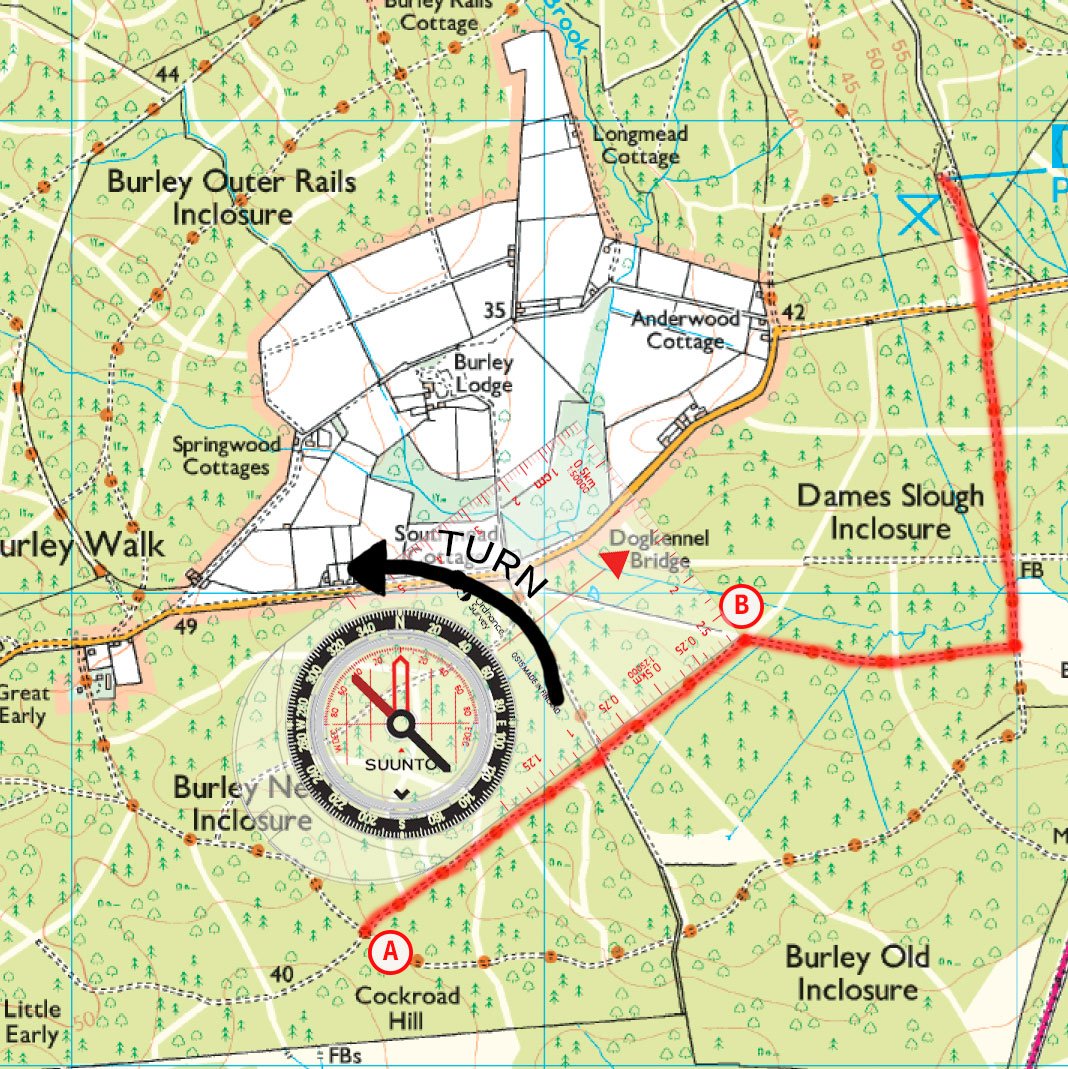 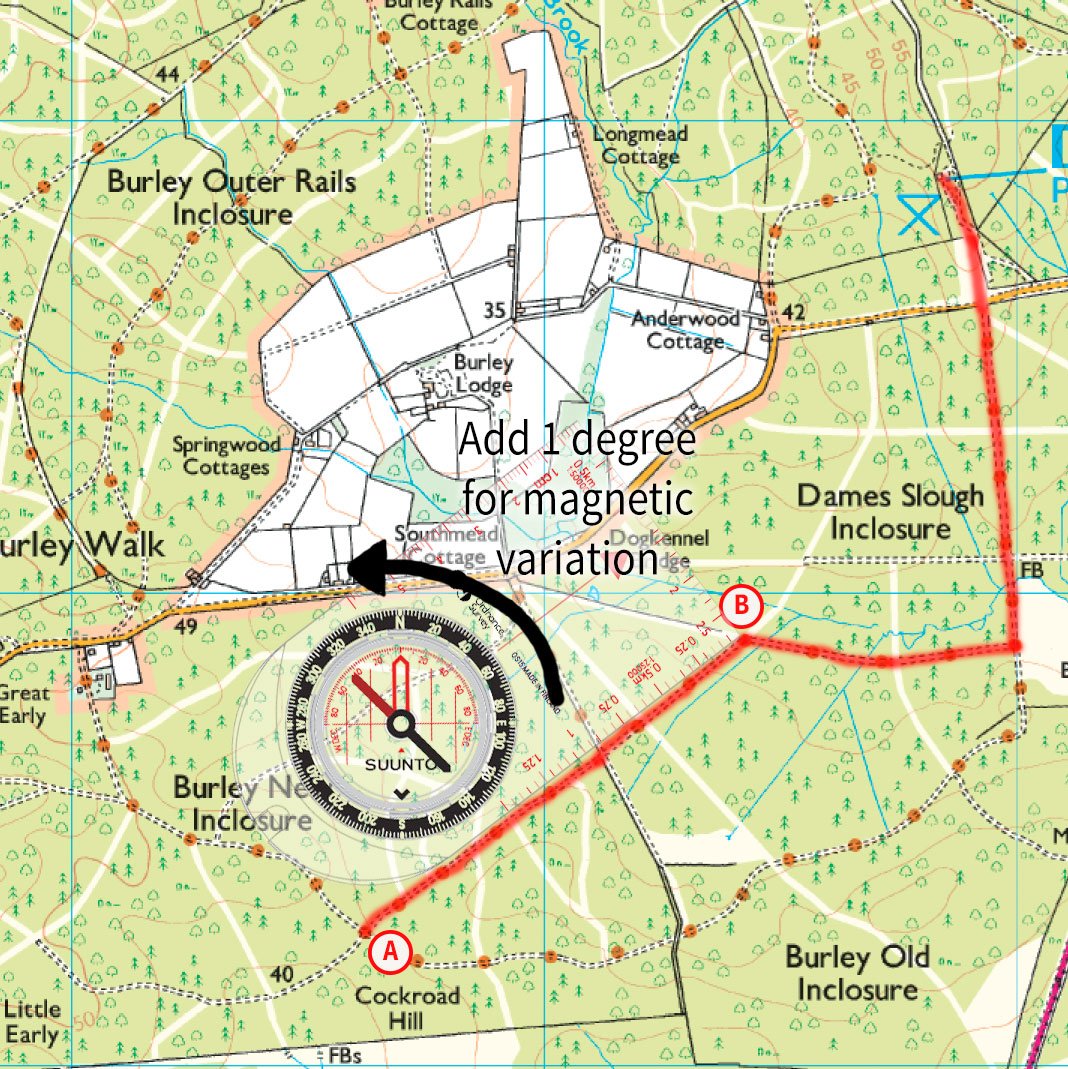 3. You need to adjust your compass for magnetic variation. Magnetic north varies throughout Great Britain, and can range from 0 to 5 degrees – your OS map will tell you the most current value of variation on the map legend. Be sure to add on this magnetic variation by rotating the compass housing.

4. Now you can take your compass off the map. Hold the compass flat at waist height, and turn yourself and the compass slowly until the red needle lines up with the letter N above the orienteering red arrow. Once you have done this, the direction of travel arrow should be pointing in the direction you need to go.

5. You can look at something in the distance that lines up with your direction arrow, and then head toward this. You could pick a tree or a house, but don’t pick anything like an animal as these are likely to move!

Confusing boundary lines, paths and footpaths – People can often misinterpret a boundary line for a path or footpath or vice versa when looking at a map. This can lead to you looking for a footpath that doesn’t exist when out on a walk. Make sure you check the map legend carefully to make sure you interpret the map correctly.

Selecting a moving object to walk towards – It’S best to be walking towards something in the distance that is not likely to move (eg in poor visibility it is easy to mistake a sheep for a rock!).

Not trusting your compass – If you think your compass is pointing you in the wrong direction, then start again to work out your direction. If it says the same direction again, then trust it – it’s usually right, and your sense of direction wrong.