My brain wanted to do the Isle of Jura Fell Race but my body told me that my damaged calf muscle was not up to it. Planning is great until it all goes wrong. ‘Listen to your body’ my doctor had said.

Injuries are weird things. Since hurting my leg, climbing and running had been out but walking and climbing seemed fine, so I was easily able to convince myself that rock climbing on the Ben fitted well with ‘listening to my body’.

Demonstrating that Berghaus’s GR95 sack is comfortably capable of carrying full camping kit and the kitchen sink if necessary.

Steve Burns was keen and after a decision was made to enhance the experience by camping near the CIC hut, Berghaus kindly asked me to test a huge 95-litre GR95 rucksack so I could load myself down with as much kit as possible. In fact, the walk up was so comfortable that both sack and body passed the test. Only the climbing to do now. 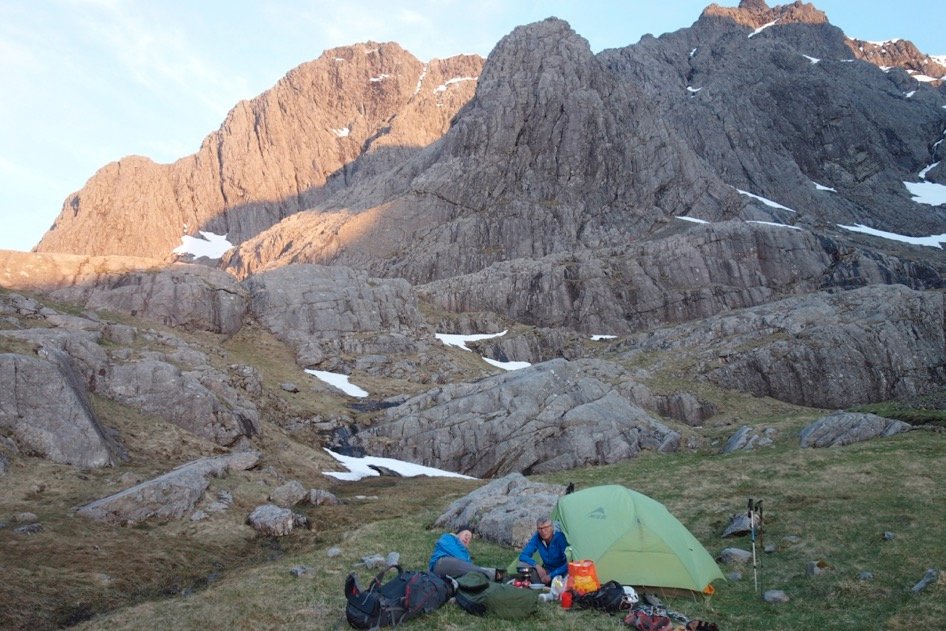 The Minus Face at 9.30pm. It doesn’t get much better. Difficult to believe that the tent blew down the next day.

Steve was keen for Torro, which I last climbed 41 years ago. I couldn’t remember it at all but it reminded me how wonderful rock climbing on the Ben is and how frightening it can be to descend a snow-filled Number 5 Gully in rock boots. 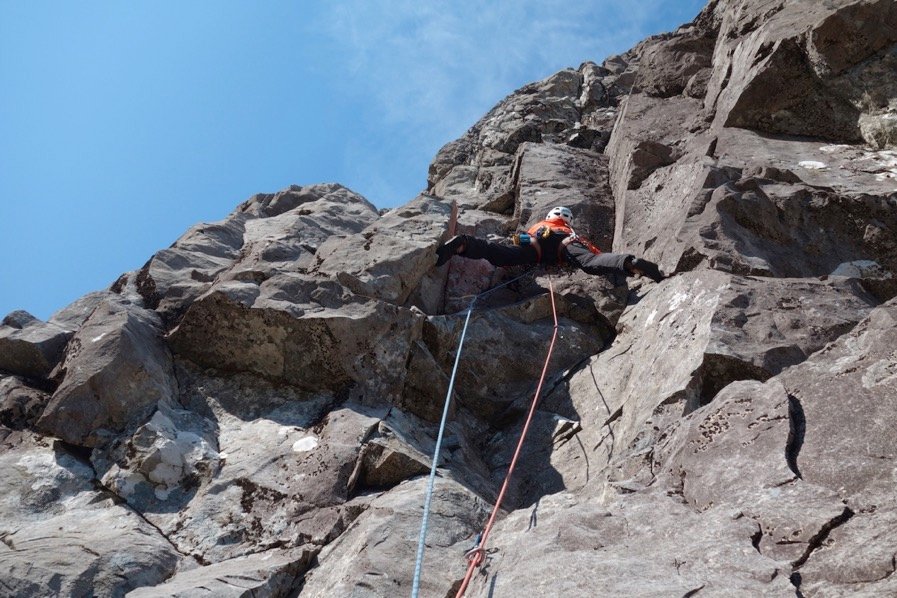 Steve stretching his legs on Torro Pitch 2. I couldn’t remember it at all after a 41-year gap.

It was then that we ended up on Sassenach, a Brown/Whillans masterpiece from 1954. The chimney pitch was by far the most energy-sapping experience of the trip and an ideal testing ground for the forthcoming Taboche jacket that I was putting through its paces for Berghaus. The jacket proved commendably resilient but the Fowler body breathed heavily and felt bruised and battered. They were hard back in the 50s. 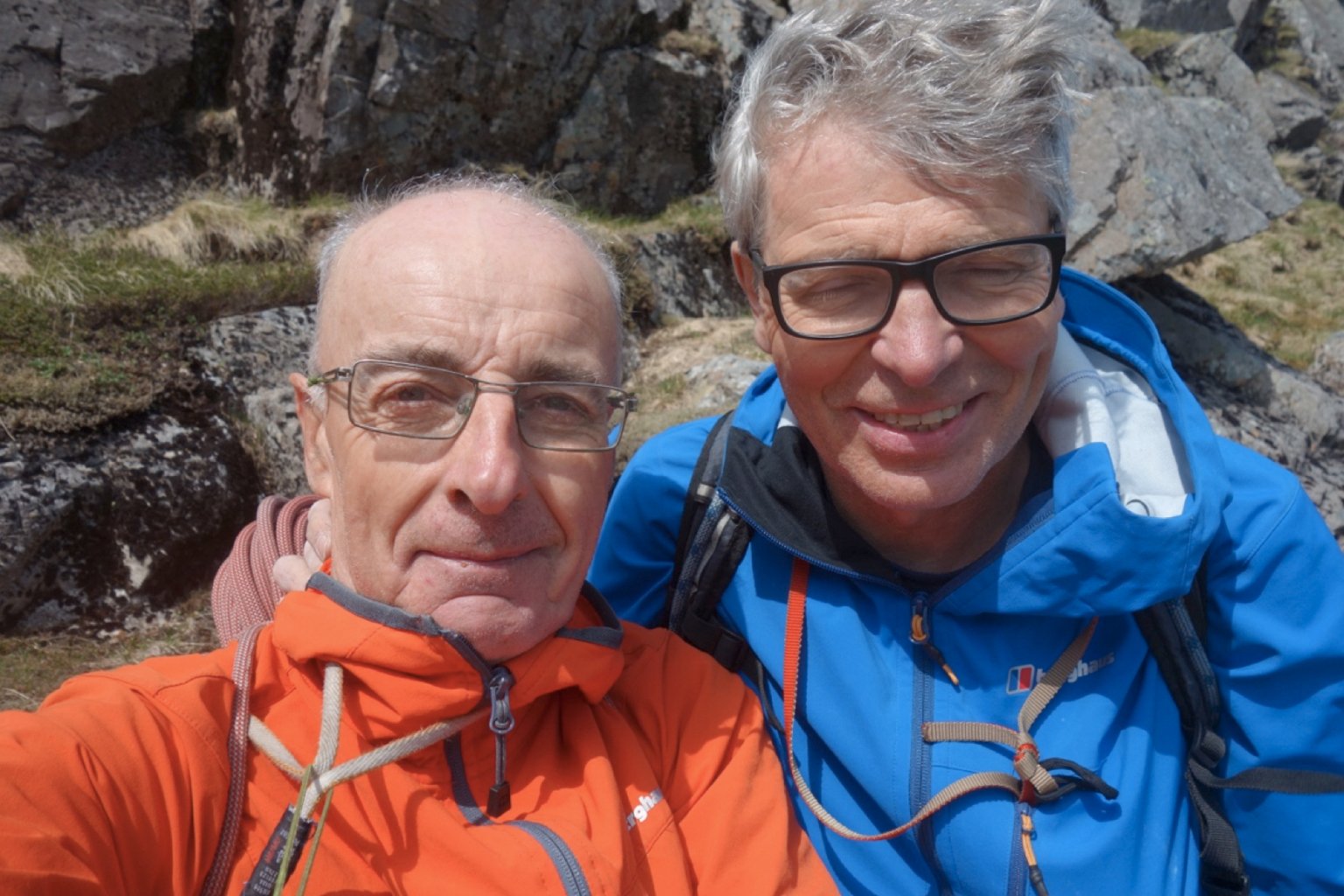 Taboche jacket (the blue one) still looking remarkably unscathed after a body scratching tussle with the Sassenach chimney.

Minus One Buttress was another route I have wanted to do for 40 years or so. Paul Eastwood joined us for a day of outrageously fine climbing. It’s easy to think of the Ben as just a winter playground, but the rock climbing there is just so good. Unfortunately, the tent blew down while we were climbing and we spent the next night under the stars. Paul Eastwood showing off a jaunty helmet angle on the wonderful Minus One Buttress.

King Kong in the sun on our final day was the icing on the cake. I was too hot. Never had that before on the Ben. 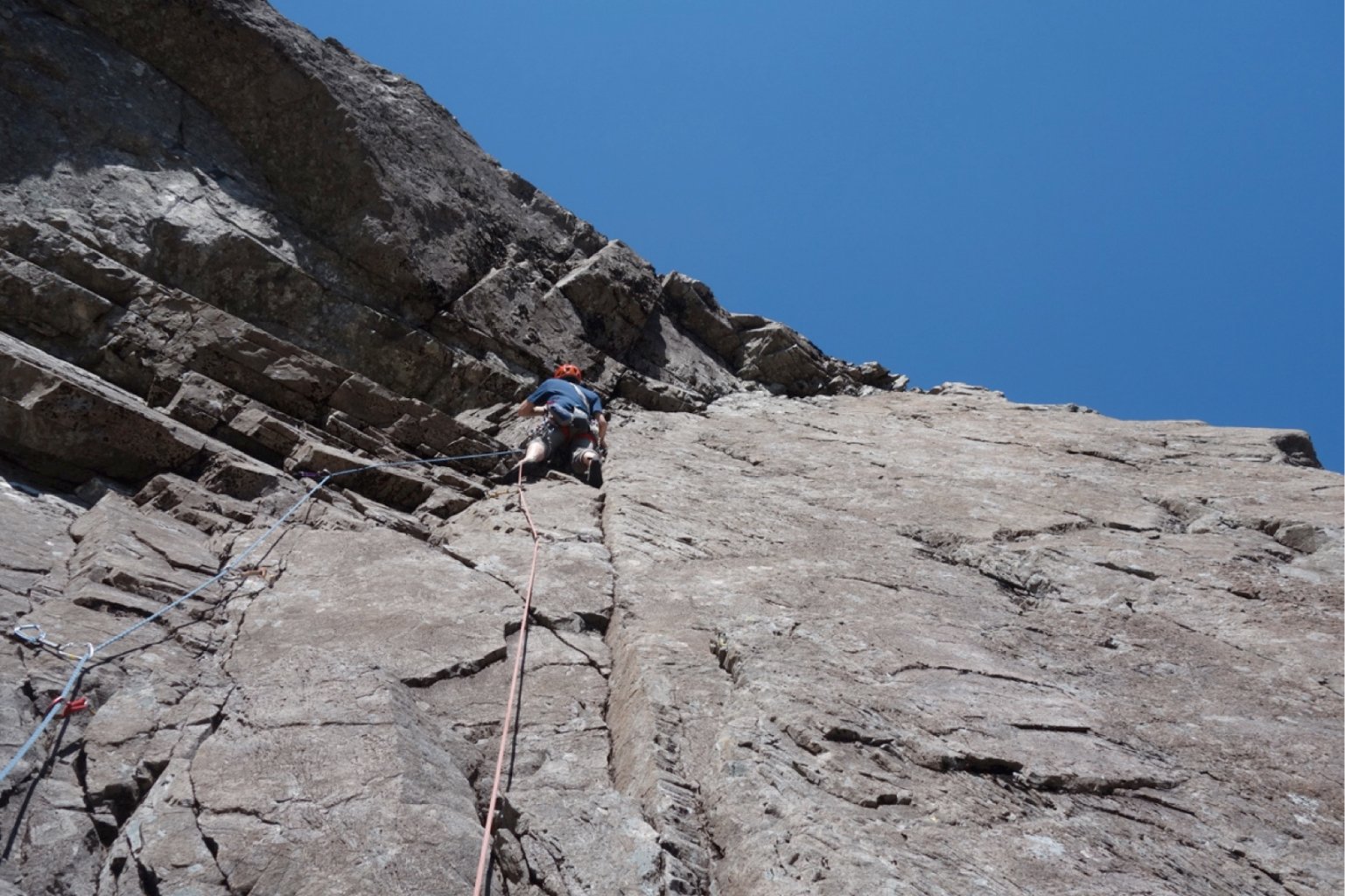 Even the deer in the Allt a’ Mhuillin sweltered and just stood in the river, too hot to bother to make themselves scarce as we approached.

End result was big smiles and the body back to the low E grades. A big improvement on six months ago and another step towards being ready for Sikkim with Victor in October. Only three months to go now!