Leo Houlding has led a team of five to complete a first ascent on the north west face of the Mirror Wall in remote Greenland.  Climbing with Joe Möhle, Matt Pickles, Matt Pycroft and Waldo Etherington, Houlding succeeded in climbing a new route on the main face of the 1,200m peak.  The team free climbed 23 of the 25 pitches and spent 12 nights on the wall.  They topped out in an upwards snow storm at 4:20am on 22 July.

Conditions throughout the expedition proved to be extremely challenging, once they were dropped off on the Edward Bailey Glacier in Greenland on 25 June.  As well as having to deal with illness and crevasse falls, Houlding and team found that previously cached supplies had been plundered by polar bears.  The weather was also problematic – after excellent conditions in the early stages of the trip, wind, freezing rain and snow hampered the team during the climb.  On top of that, the technical difficulties offered by the route itself proved to be a major challenge and the team was forced to aid climb two of the pitches.  Towards the end of the climb, they faced a race to get to the top and descend safely in time for a scheduled helicopter pick up at base camp on 28 July, Houlding’s 35th birthday. 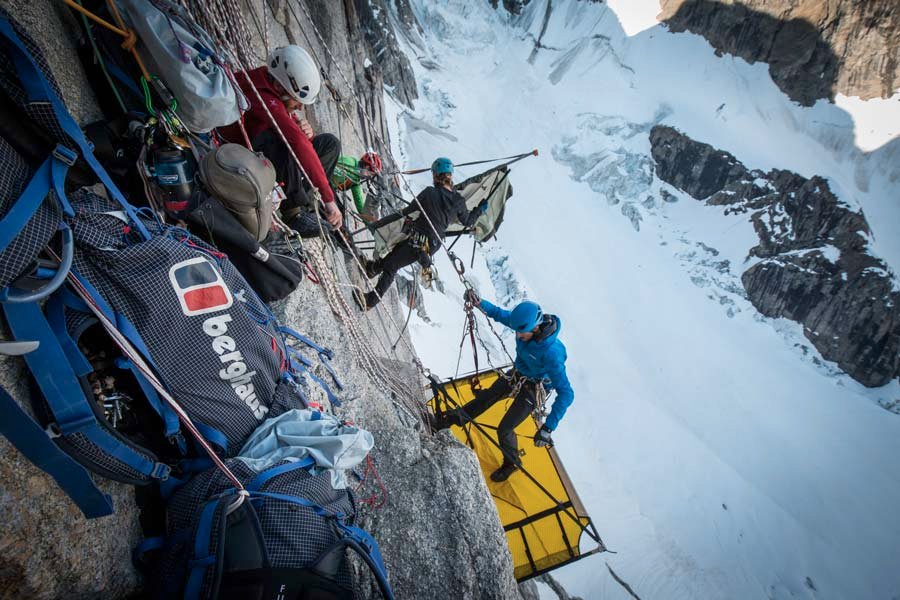 However, after nearly two weeks of painstaking progress, the climbers completed their new route on the Mirror Wall, reaching the top during a snow storm.  The descent was no less arduous, but they all succeeded in getting back down safely and returning to base camp, where they were able to transmit a short message to Berghaus to confirm success, and Leo tweeted:

“We nailed it!  All safe in base camp after climbing Mirror Wall by the main face.”

The Mirror Wall (1,200m) is located beyond the Edward Bailey Glacier in eastern Greenland.  Supplies were shipped to Iceland, flown by light aircraft to Greenland and then snowmobiled to an uninhabited hunting outpost deep in the Scoresby Sund fjord in early May, before the seasonal break-up of the sea ice. Houlding’s team left the UK in late June and after a stop off in Iceland, made their way by air to Greenland before helicoptering in to basecamp in the wilderness of Renland, and then approaching the wall. 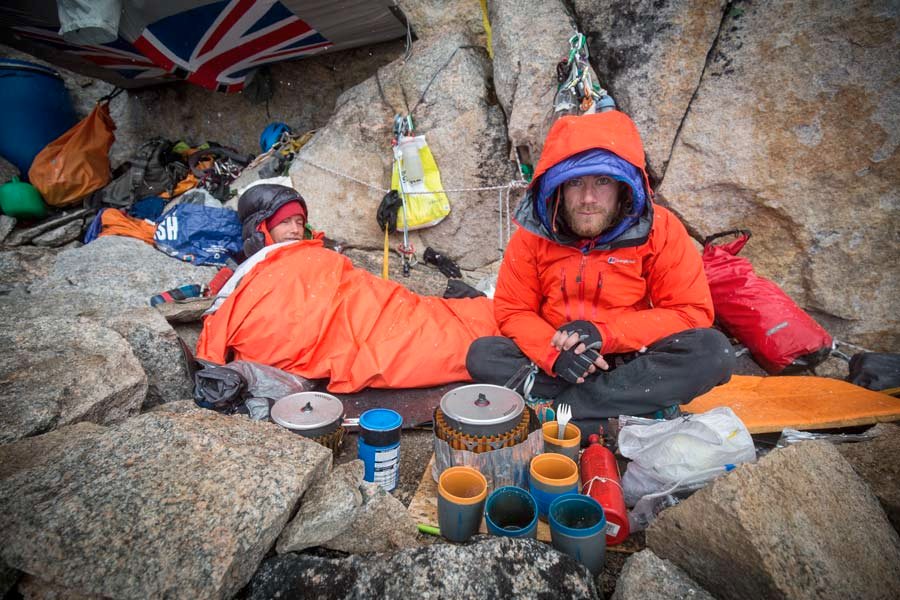 The Mirror Wall was Houlding’s first major expedition since becoming a father and his daughter Freya celebrated her second birthday while he was climbing one of the most difficult sections of the wall.  The trip was also Houlding’s first since the death in a wingsuit flying accident of his long-time climbing partner and close friend Sean ‘Stanley’ Leary.

Speaking to Berghaus, Houlding reflected on the different perspective he now has when climbing:

“I know I am now more risk averse.  I have felt danger keenly throughout this trip for both myself and the crew.  I do not want to miss out on the ephemeral joy of Freya’s childhood, but expressing myself in this landscape is a part of me.  Having the privilege of running wild with these strong guys out here in this grown up playground for weeks on end is to be cherished too.” 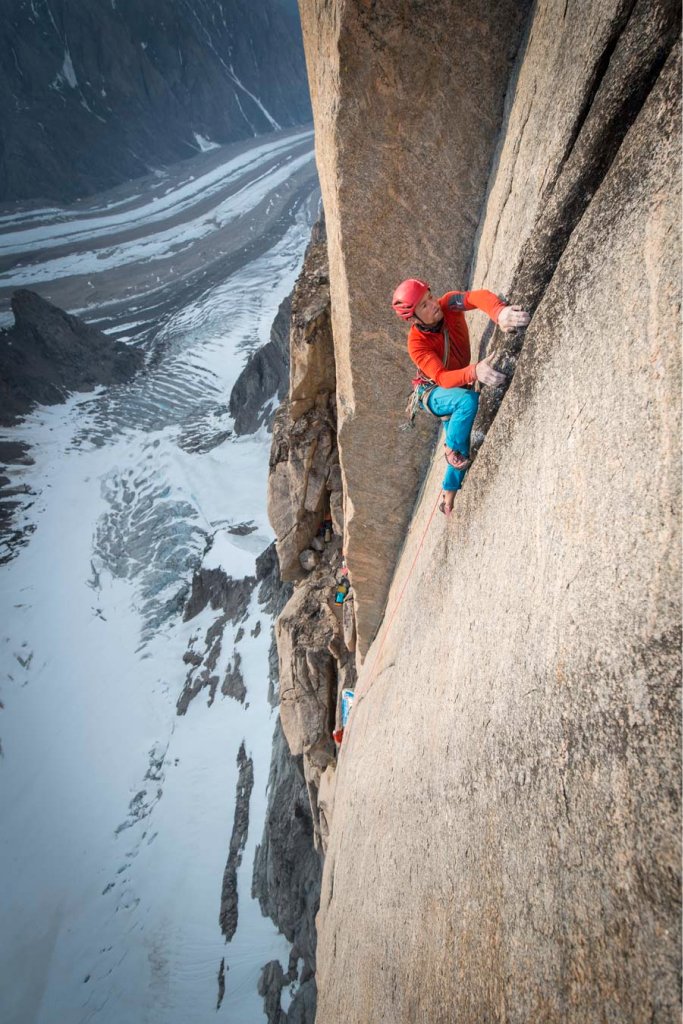 “I have thought much about Stanley, his widow Annemeika, and fatherless son Finn.  Stanley’s death, pursuing his dream of freedom and flight at such an untimely moment, has made me question my own values and drive.  One day a tiger or a life-time as a sheep?  Surely there is another path?  I suppose I’ll continue to strive to find the balance between domestic and wild, comfort and epic, family and adventure.” 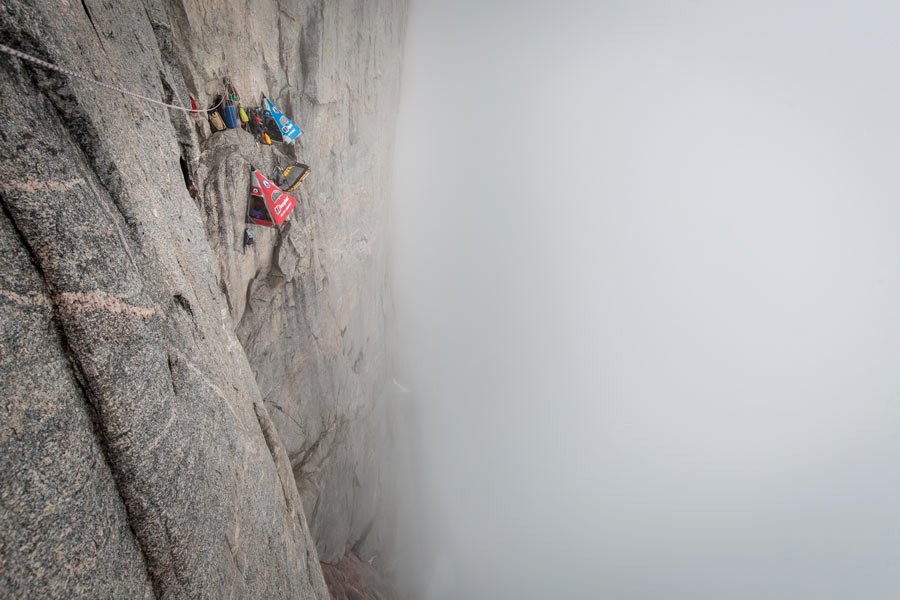 The expedition was sponsored by Berghaus and the team was equipped with the latest kit from Berghaus’ Extrem range, including prototypes of new developments scheduled to be launched in autumn/winter 2016.  After the climb, Houlding commented on the kit from base camp:

“It’s no exaggeration to say that the Berghaus Extrem kit was essential to our success – thanks guys!”

Speaking before they left the UK on the trip, Paul Walker of Tangent Expeditions, the world’s leading operator of mountaineering and ski touring expeditions to Arctic Greenland, added:

“After spending a lifetime climbing in the Arctic, I believe that the main face of Mirror Wall is the single most impressive unclimbed wall in the whole of Greenland.  It’s an extreme objective of the highest calibre in every sense – just getting there is a major logistical challenge.”

Pick Up Your Litter