Working with your rope is a fundamental within all types of climbing, with the exception of bouldering. Competent knot tying (every single time) is indispensable, simply put, your life depends on it.

One of the BMC’s first good practice posters was titled ‘Check or Deck’. Produced in 1998, it featured a climber falling from high on a cliff, the rope unattached to his harness. 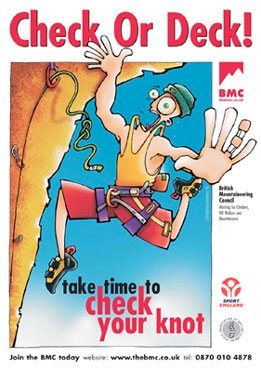 In most situations, the individual climber is responsible for his or her safety. Having said this we strongly encourage a ‘buddy’ system of checking each other’s knots before and during a climb, this advice applies to beginner and expert alike.

To test yourself, practice tying knots blindfolded or in the dark, you never know, one day you may have to do this for real!

The word knot is a rather generalised term. We should also introduce the term hitch, which connects a rope to another object like a carabiner or even another rope. A bend is a knot which is used to join to rope ends. A bight is any section of rope between the ends.

There are many knots and variations that might be worth learning, but there are just a handful of essential knots to master which will get you up and down any climb or mountain on the planet. 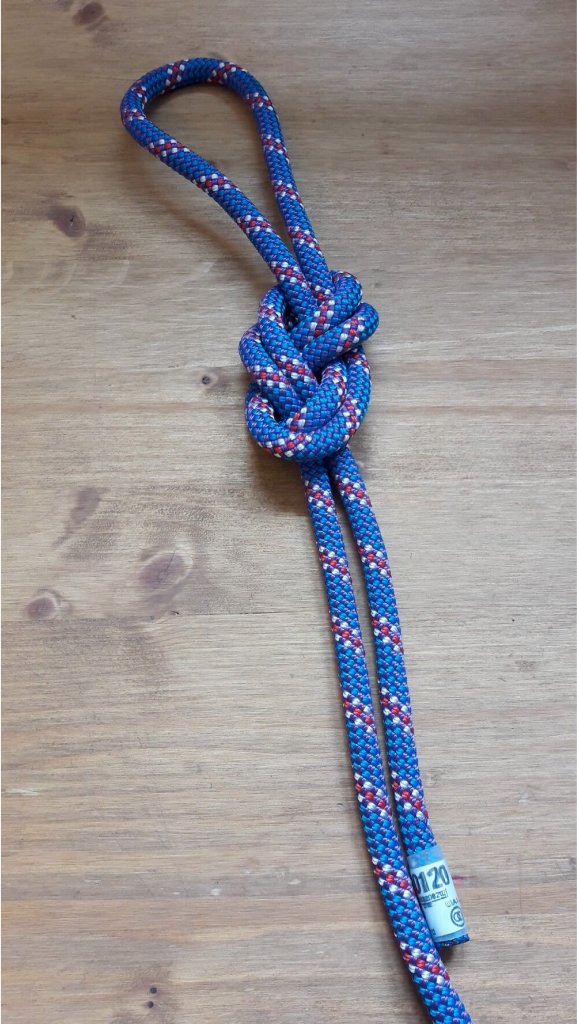 This is the most common knot for tying the rope into your harness, and the most frequently used of all climbers’ knots. There are other good knots for ‘tying in’, but the figure of eight is popular due to its clear visual symmetry, making it easier to cross-check than some of the alternatives. The knot should be well ‘dressed’ and ‘clean’ without multiple overlapping strands, also the knot should be hand tightened so every strand takes a share of the load, if this isn’t done, it doesn’t make the knot unsafe, but makes it much harder to undo after a sharp force is applied.

Pros: Bombproof, and will help to absorb some of the forces applied to the rope in the event of a fall or a load. Has a clear form and symmetry, easily verifiable. A well tied figure of 8 rarely unthreads itself.

Cons: Can be hard to untie after repeated and heavy loading.

Tips: Have at least 15cm of tail. Equally tighten the strands to enable the forces to spread through the knot. Consider a stopper knot especially when tying into a harness. Whenever tying in, avoid being distracted by others. Lynn Hill, one of the world’s most famous climbers almost ended her career when she did not tie her knot correctly. 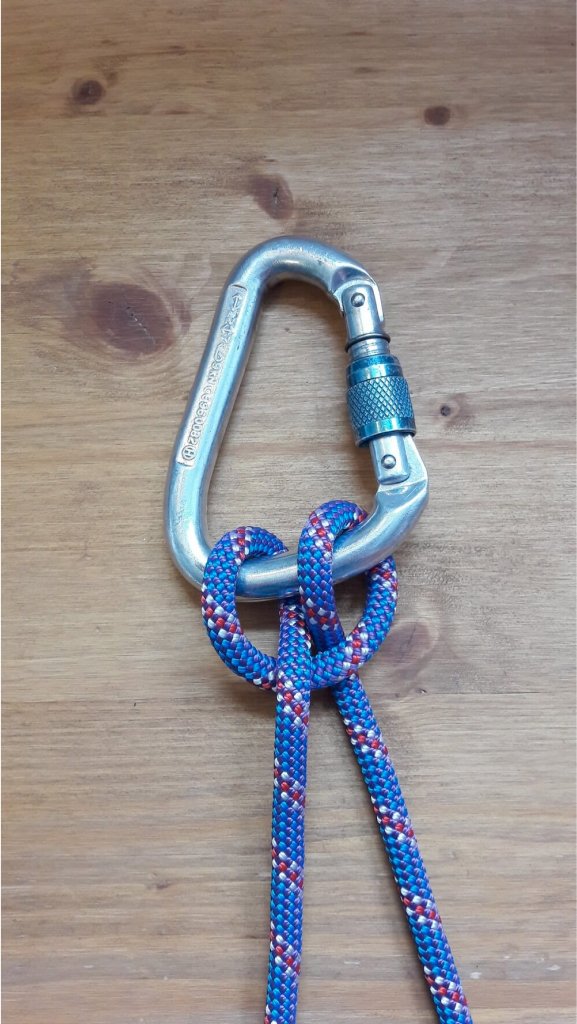 Best used for: Tying into harness, tying around an anchor of any kind. The bowline is popular with sport climbers as a tie-in knot because it’s easy to untie after having held a fall.

This is an ancient and simple knot used to form a fixed loop at the end of a rope. It has the virtues of being both easy to tie and untie; most notably, it is easy to untie after being subjected to a load. For these reasons the bowline has been referred to as ‘King of the knots’.

Although considered a reliable knot, its main deficiencies are a tendency to work loose when not under load, to slip when pulled sideways and the bight portion of the knot to roll over in certain circumstances. To address these shortcomings, a number of more secure variations have been developed, such as – bowline on the bight; French bowline; double bowline; and bowline with a single fisherman stopper.

Pros: Easy to undo, even after a heavy load. Easy to adjust without undoing it. The easiest knot to use if you want to tie off a rope around a tree or boulder.

Cons: How to tie the knot is often forgotten by people. Easier to tie than a figure of 8. Prone to loosen so requires the use of a stopper knot when tying in.

Tips: Use the single fisherman’s knot as a stopper when tying in. 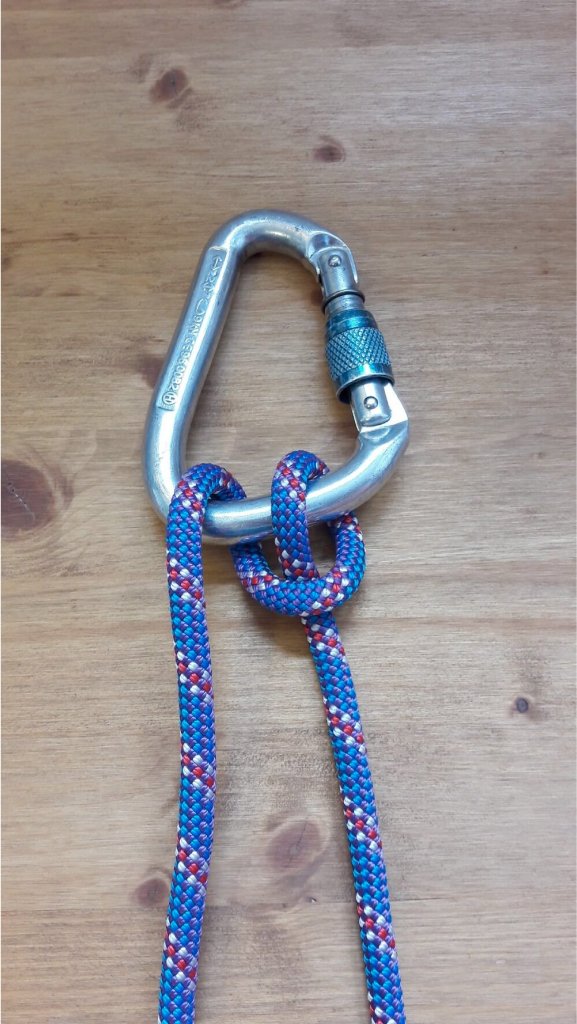 Best used for: Securing the rope to a carabineer on the bight (without using the end of the rope). Very useful for arranging and tensioning belays.

This is a super simple and strong knot that is fast to tie and can be adjusted easily when not loaded. Indeed the knot can be tied in a single second with a little practice; it can even be tied one-handed. To make a strong and adjustable fix in the middle of the rope, the clove hitch is our ‘go-to’ knot.

Pros: Elegantly simple, very easy to loosen after a load, quick and easy to adjust.

Cons: Only a ‘hitch’ and needs to be tied around a post or carabineer to hold it together. If you remove the carabineer, the clove hitch will immediately fall apart. So for certain applications it is not considered as an adequate substitute for a bowline or figure-eight on a bight.

Tips: Tie first then adjust after for a perfect fit. 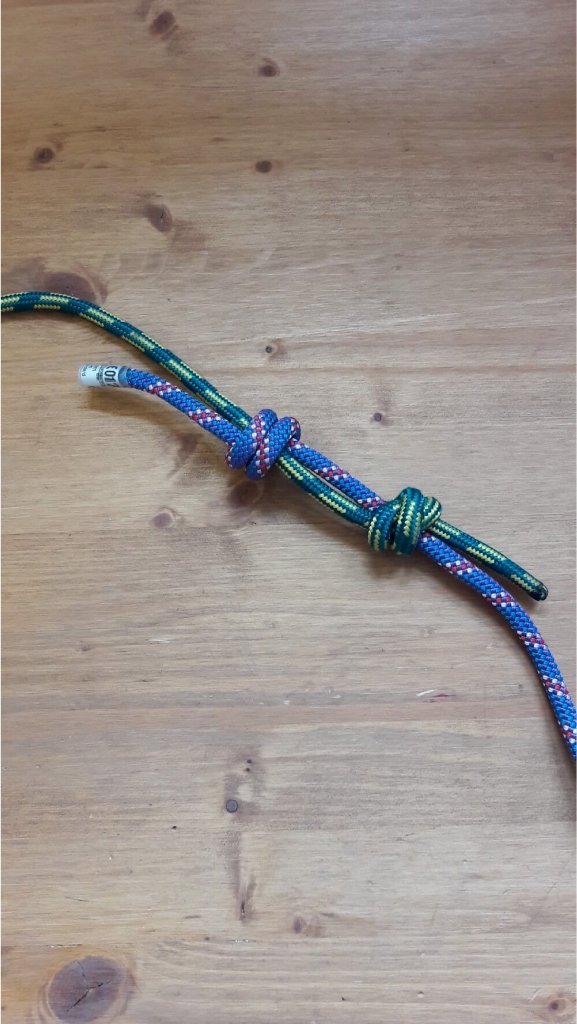 Best Used for: As a friction device for controlling the rate of descent in belay systems.

This simple hitch is invaluable for lowering people without the need of additional hardware other than a carabiner.

The Italian hitch creates friction by having the rope rub on itself and on the object it has been wrapped around. There is no static friction (localised abrasion) on any part of the rope as it is a continuously moving knot. One very useful aspect of the Italian is its reversibility; it can be pulled from either side of the rope and it still works just as effectively.

As with most belay devices and some hitches, the Italian hitch can be tied off to maintain tension in a manner which is easily released under tension, usually by using half hitches. The Italian hitch is sometimes a preferable method for direct belays than using a normal belay plate. This can be useful when the anchor, carabiner and hitch are above or behind the belayer whilst attention is paid to the loaded end of the rope.

Pros: Elegant, simple and very easy to control. It dissipates heat very efficiently because no two surfaces of the rope are in contact with each other for more than an instant.

Tips: make sure the knot has already ‘rolled over’ in the correct direction before lowering someone. 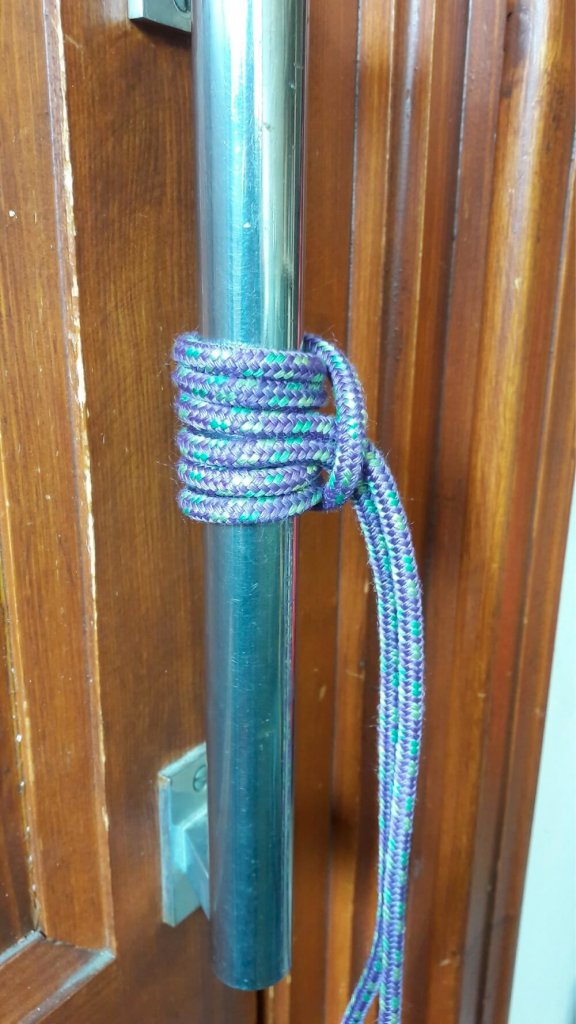 Best used for: Used to make any permanent loop of rope or cord. Use this knot to create a cordellette (a piece of cord tied into a loop) or to create a prusik.

The double fisherman’s is two single fishermans knots pulled together. It has been shown to be enormously strong under very high loads. Please note that this is a permanent knot and once heavily loaded, cannot be undone. This can be either an advantage or disadvantage depending on the situation.

Pros: Reliable, safe knot for joining two ends of a rope or cord together.

Cons: This knot will weld itself shut over time, effectively making it impossible to untie. This knot is only to be used for joining two pieces of rope or cord. To join two pieces of tubular webbing, use a tape knot/water knot (not covered here).

Tips: Dyneema and Spectra cords have higher lubricity than regular nylon cord which leads to lesser knot-holding ability. The manufacturers are recommending using the triple fisherman’s knot rather than the traditional double fisherman’s knot. Under very heavy loads, particularly in 6mm cord, the sheath can fail (at the knot) and as a result the core slips through. 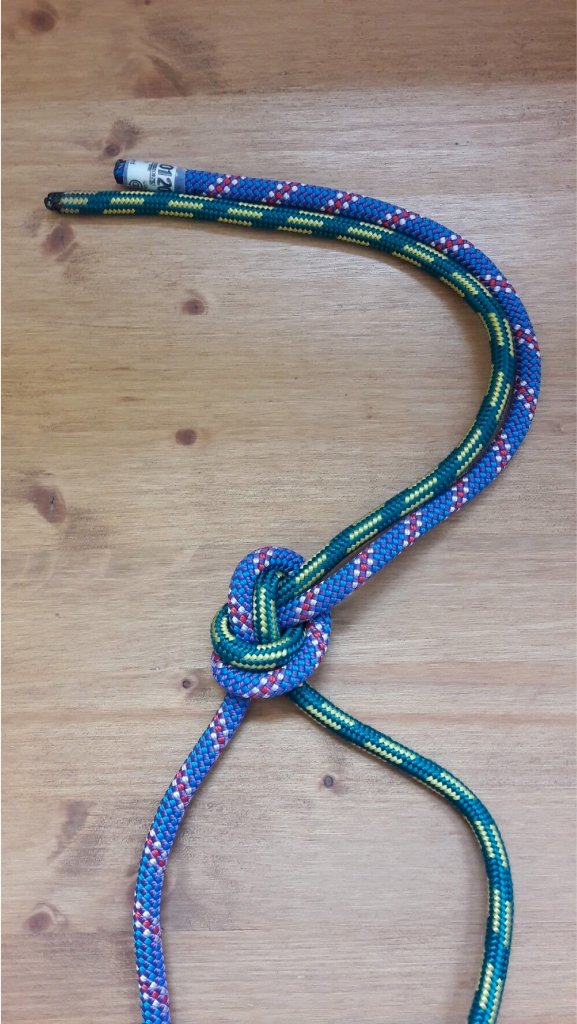 Best used for: Climbing up ropes, and self rescue situations. Used as a back up when abseiling. Crevasse rescue and ‘escaping the system’.

Pros: A unique and versatile knot, invaluable for self-rescue. The humble prussic knot has saved many lives.

Cons: Can melt if allowed to slip significantly. Needs care when using wet or icy ropes. Needs practice and experience to be used well.

Tips: Use 5mm cord when making a prussic. The French prussic is the most versatile. Test the prussic before use and adjust the amount of turns to increase or decrease the friction. Don’t have it too loose or too tight.

Best used for: Joining two climbing ropes together for a rappel.

An ancient and simple way of making a loop or for joining two ropes together. This knot can be tied at the working end of the rope or can be tied on the bight anywhere along a rope.

Pros: Strong, simple and snags less frequently than other knots. When placed under tension, the knot tends to rotate away from the rock surface, making it less likely to slip into cracks or grooves where it might become stuck.

Tips: Always make sure the knot is tidy and symmetrical with a minimum of 25 cm tails. Never tie a double figure of 8 knot instead of the double overhand when joining two rappel lines (even though this is counterintuitive), the overhand is more stable for this application. Several fatalities have been linked to this error. 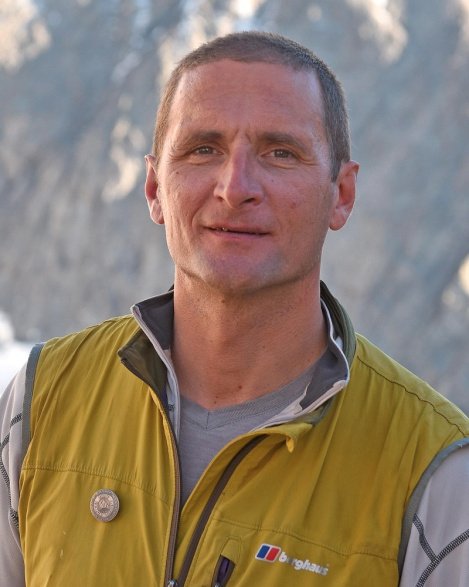 Matt is a climber, mountaineer and skier with 30 years of experience gained all over the world. He specialises in big wall free climbing and has established new routes in Greenland and Morocco. Matt is an experienced IFMGA guide primarily working with specialist guiding agency Mountain Tracks. Matt is available for climbing and skiing in Europe and the UK and can be contacted at mat@mountaintracks.co.uk