Steve Birkinshaw started night orienteering over 35 years ago, aged 14, and has won numerous events at night including being British Night Orienteering Champion and winner of the Elite course at the Dark Mountains Mountain Marathon .

“Navigating at night is so much harder than in the day but for me the extra challenge makes it more enjoyable. However, I have a tendency not to slow down sufficiently and use the proper techniques. I quite often just run and hope then end up making mistakes. I need to remind myself of these tips before I go out.”

Jo Faulkner is a long time fell-runner, climber and adventure racer with a background in tuition, coaching and outdoor product development. Been slowing down steadily for a number of years but still manage to complete some big events, such as the Dragon’s Back Race, Dark Mountains Mountain Marathon and Cheviot Goat.

Our Tips for Safe Night Navigation

Here are our tips which we developed as a result of a night navigation course we put on for Berghaus at the Kendal Mountain Festival.

Steve says “On my first night orienteering event when I was 14 I was going through a really thick bit of forest and not making much progress.

I had probably been in there about 5 minutes but it felt like 20 minutes and I was starting to panic thinking I would never get out. I managed to calm myself and realised I just needed to trust my compass. So I continued on my compass bearing and sure enough a couple of minutes later I came out in exactly the correct place. “

2. Use some sort of distance estimation

Steve says, “Quite often without using some sort of distance estimation I have gone only half the distance I thought I had travelled.”

One technique is to use timing. For a variety of terrain you work out how many minutes it takes to cover 1000m. Then it is simply a matter of working out the distance on the map, and working out long it should take.

The standard orienteering technique is pace counting. You know many steps it takes to run 1000m over a variety of different terrains and from the map you can work out how far you want to go and so how many paces. I never use pace counting in the day but I do use the technique for shorter distances at night.

Unless it is a clear night with a full moon you will not be able to see hills in the distance and locate them on your map. However, you will always know whether you are climbing or descending and know roughly how steep it is.

This is really useful information to pinpoint your position. You will also probably see smaller hills and valleys which you can also use to work out your location.

4. Concentrate and do not rush.

Most mistakes are made when you stop concentrating or when you get tired. At night when the navigation is harder you need to be particularly careful.

A moments lack of concentration or not slowing down sufficiently to take an accurate bearing or read the map can results in a big error. Unless you are on a road it is very rare to be able to ‘switch off ‘and just run.

At night it is usually best to take a longer safer route along well-defined features. Not only is a mistake less likely but you will be moving a lot faster on the safe route. 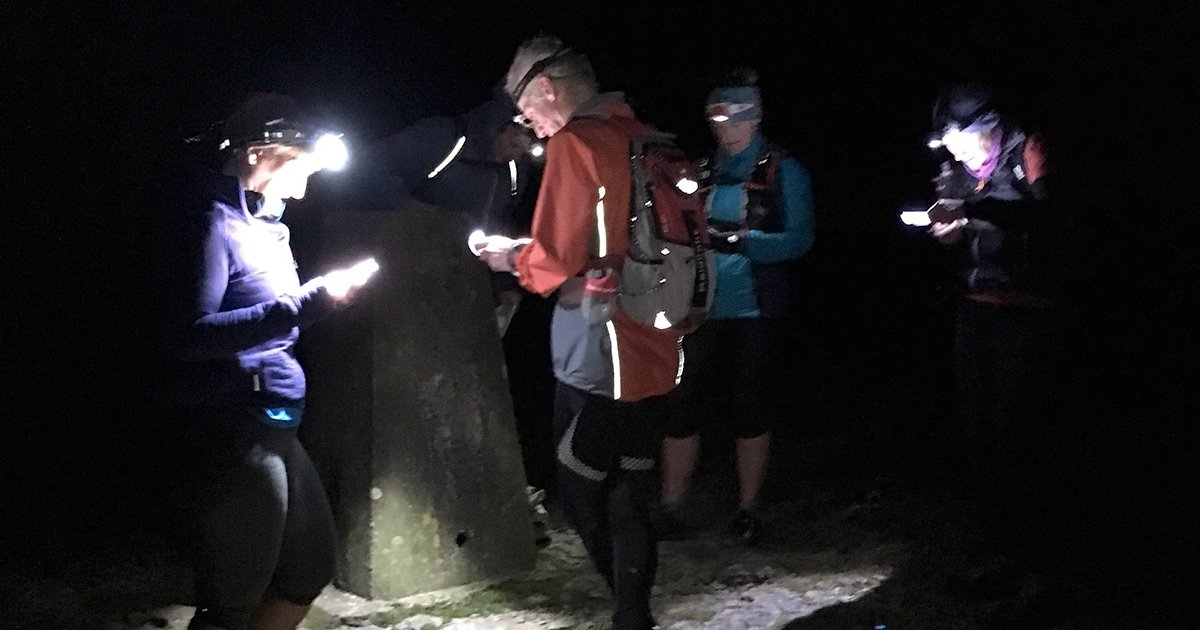 6. Have a good headtorch (and a backup or spare batteries).

A brighter headtorch is usually better but the reflection off a map can make it hard to read. Some of the more expensive headtorches can compensate for this problem. Petzl Reactive Lighting torches work on a sensor system that detects how much light you need and constantly adjusts the brightness output as you move.

This is really good for night navigation and makes maximum use of your battery life. As you look at the map, the brightness dims so that you are not dazzled by the light shining back off the map, but when you look at the ground and into the far distance the beam increases so that you can pick out distance features. It really does work, although can take a bit of getting used to.

However, the key thing is to make sure you never run out of light. Steve says, “I recently did a night orienteering event and I brought the wrong battery pack with me, which ran out after 5 minutes. No problem I thought as I had a decent spare. However, I had also forgotten to change the batteries on my spare. I got half way round the course before I had to give up as I did not even have enough light to see the map.”

If it is misty then the light from the headtorch will be reflected back at you and navigation becomes really difficult. The best thing to do is to take the headtorch off your head and hold it at waist/knee height – you will be able to see a lot more.

Go night orienteering or just running at night. The more you practise the easier it gets. Running at night can also make a normal boring run much more enjoyable.

9. Have a plan for if everything goes wrong.

Have a plan for if everything goes wrong and you have no idea where you are. The first thing to do is orientate the map, look around and see if there are any distinctive features.

Think back and remember when you were last sure exactly where you were and think about all the features you have passed since then and try to locate them on the map. If you still have absolutely no idea where you then take a bearing to a major feature (road, wall) or sometimes you can climb to the top of an obvious summit.

Knowing what your elevation is makes the navigation much easier. However, make sure to reset the altitude regularly when you pass obvious features.

We both prefer a good old map and compass and in many races having a GPS with you is not allowed. However, when a GPS is allowed it is great to have one with you (together with spare batteries)as a back-up and also to know how to use it.

Steve says “When I am supporting on a Bob Graham Round at night I always have one with me and I have used it on several occasions. For example, one time on the Helvellyn ridge at night with visibility down to less than 2 meters we were running over the main paths without even seeing them. It saved a lot of time having the GPS out and using it.”

Realise that you are more likely to get badly lost and fall over and hurt yourself at night.

The weather will probably be colder than in daylight and there will be fewer people around so if you do have a problem the consequences are much more serious. Make sure someone knows where you are and you have enough equipment with you to survive the night.

In the daytime it is possible to be quite sloppy with your navigation and get away with it. At night you need to be precise.

“There was a control on the Dark Mountains Mountain Marathon in the Peak District and I was running with Tom Gibbs. It was on a re-entrant on a fairly gentle slope with no distinctive features nearby with the mist down. Clearly there was the potential to lose a lot of time.

We took a safe route to a definite attach point 1km from the control, where we reset our altimeter. Then we both took a careful compass bearing straight to the control. We also paced counted and set off steadily.

As we approached the correct area (which we knew from the pace counting and altimeter) we slowed down and split up by 20m (so we covered a bigger area) and continued on the bearing. But we were carefully looking all around for the control.

Tom thought he spotted the control so he ran to check but I stayed where I was in case it was not the control and we did not want to lose the line of our bearing. It was the control!

We stayed safe, used these tactics and found it perfectly, while a large number of other teams made big mistakes.”