Wales. Where do I begin…

The weather in the UK is famously bad; being from the Lake District, I know how much it rains here as well as anyone. I knew going into this trip that a day of bad weather here and there would slow us down, but I didn’t quite account for a whole week of rain starting upon our arrival in the Pen-y-Pass. Bad luck? Yes. Did we make the best of it? I like to think so.

The internal debate in my head this week has been speed vs safety. Solo climbing has its obvious risks, but it is a very fast and efficient way of covering ground if you’re within your comfort zone. To be perfectly clear, I do not condone solo climbing in the rain, however I know myself and my own capabilities pretty well, and am confident that I never crossed the line into any unacceptably risky behaviour (mainly because I could have either down-climbed or escaped into a neighbouring gully on most of the routes, had things started to go wrong). 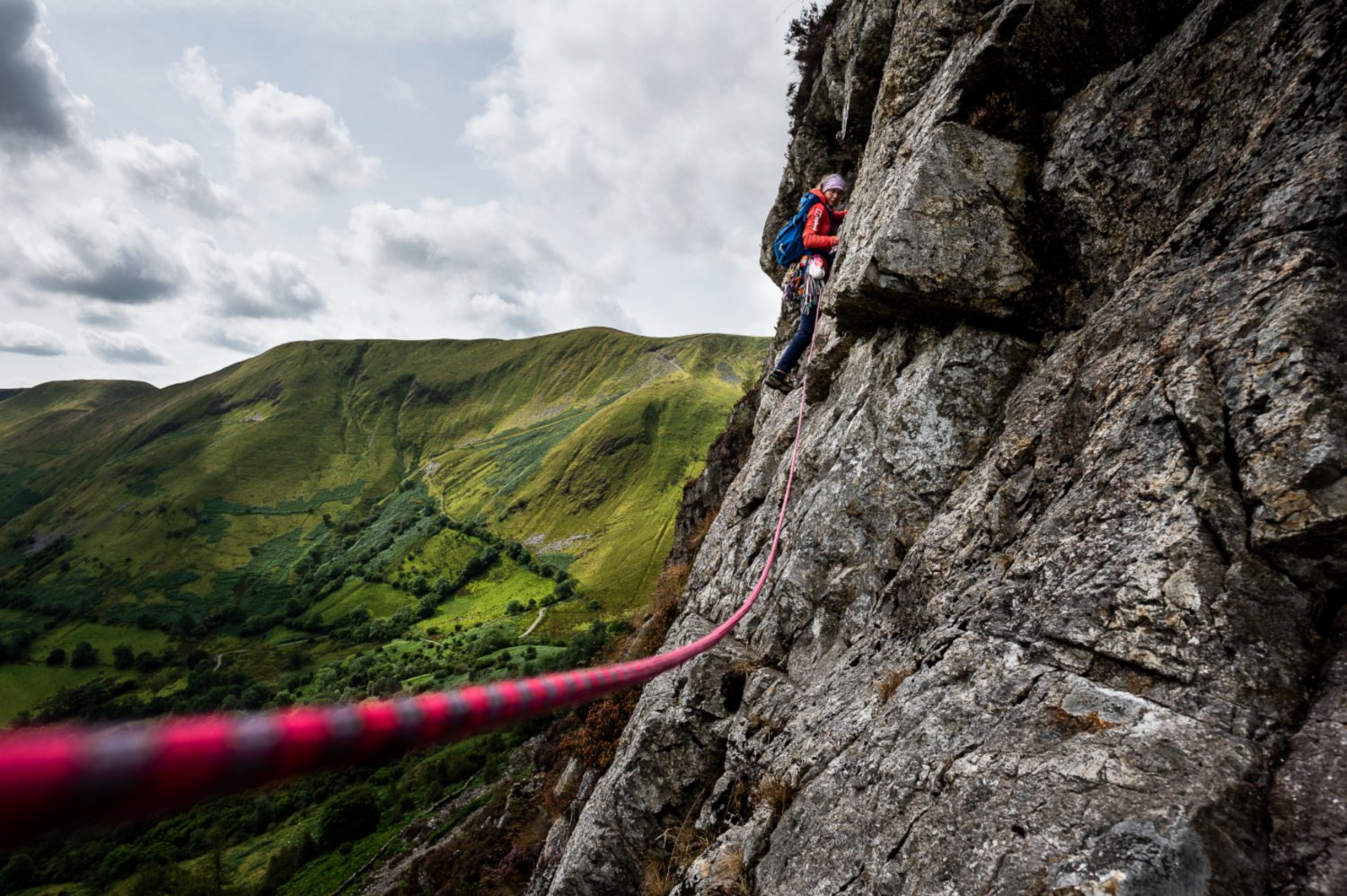 Will o’ The Wisp, Craig Cywarc

The three routes I needed to do up on the high and exposed east face of Tryfan were niggling at me, and one wet and misty afternoon I decided that we needed to at least walk in and see what the crag looked like. Unsurprisingly, I ended up soloing all three…

Overlapping Ridge Route passed without incident. The climbing was easy, aside from one move on a very wet slab that required a little bit of thought, and I soon found myself on the top. Coming down the next-door gully to descend was definitely more serious, as it was running with water and incredibly vegetated and slimey, but I reverted back to what I had learned during my time in the Guyanese rainforest in 2019 – if you’re brave enough, just about anything can be used as a hold.

Gashed Crag was next on my list, on the other side of the gully, and despite being exactly the same grade was a totally different story. The first few pitches were fine, but I soon found myself at the bottom of a tight, polished chimney with water streaming down from above. I deliberated for a few moments on whether or not I should continue, but soon found myself wedged into the obstacle, squirming my way upwards and praying for good holds to appear soon. Fortunately they did, but there was definitely a moment or two where I had to have a word with myself. 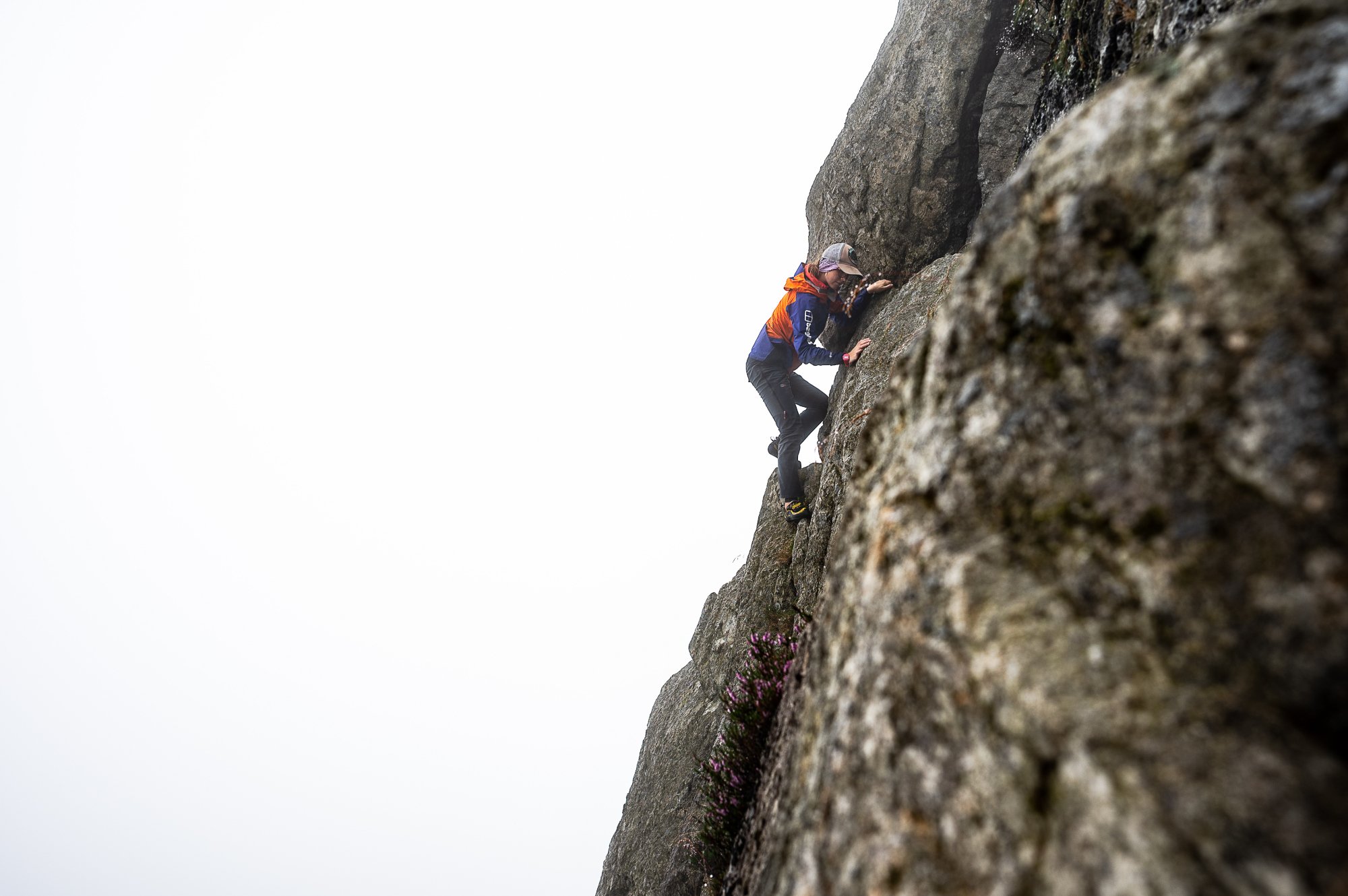 Grooved Arête was the last of the trilogy on Tryfan, and was the only one I had done before (as my very first mountain multi-pitch solo). I couldn’t remember much about it, only that the climbing was steady, but enjoyed every minute of carefully placing my hands and feet on the wet rock, and manoeuvring my way to the top of Tryfan for the third and final time. In total I climbed around 700 metres that afternoon – not too bad for a rainy day! 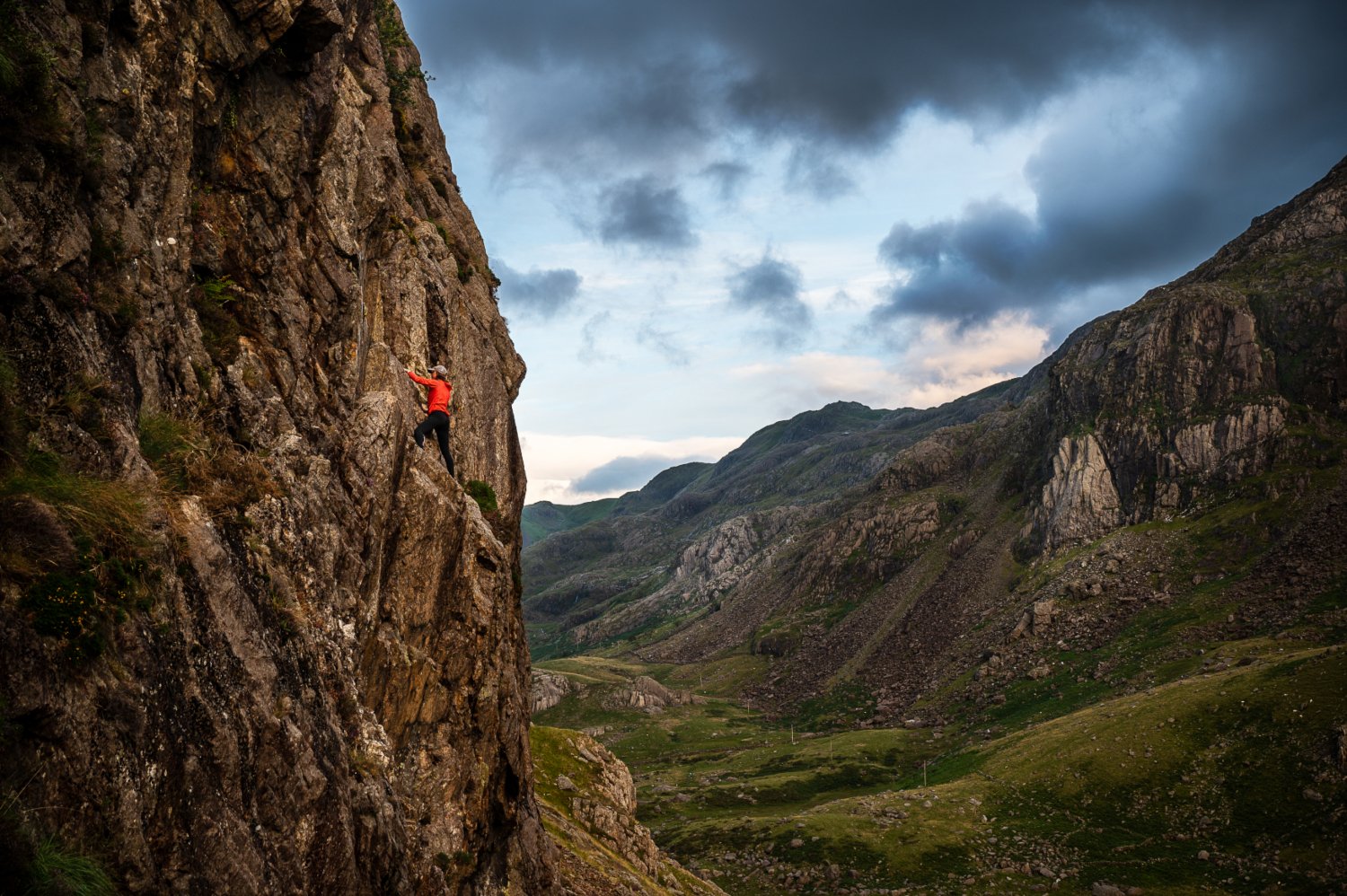 Back in the Pen-y-Pass, Carag Wastad was a highlight for me. We got a clear evening, and my solo of Crackstone Rib was one of my favourite climbs of the trip so far; stepping out into space on the exposed nose of the crag, hundreds of feet above the road below. The Wrinkle was also good, though much wetter and a little loose towards the top. Dinas Cromlech was as intimidating as ever; with the strange, open-book rock formation looming over the road.

Looking up at the two climbs I had to do (Flying Buttress and Spiral Stairs), I was a little intimidated, but they were actually the easiest and most enjoyable routes of the whole Welsh leg in my opinion, with sound rock and good holds all the way. Nea down at the Grochan was a fun climb, albeit a little soggy, and The Cracks on Dinas Mot gave us a little more trouble than we bargained for when a sopping wet and slimy groove forced me to abort my solo attempt. Marc and I came back with a rope later that evening, but perhaps left it a little late and ended up doing the majority of the climb and the descent by headtorch…you live and you learn. 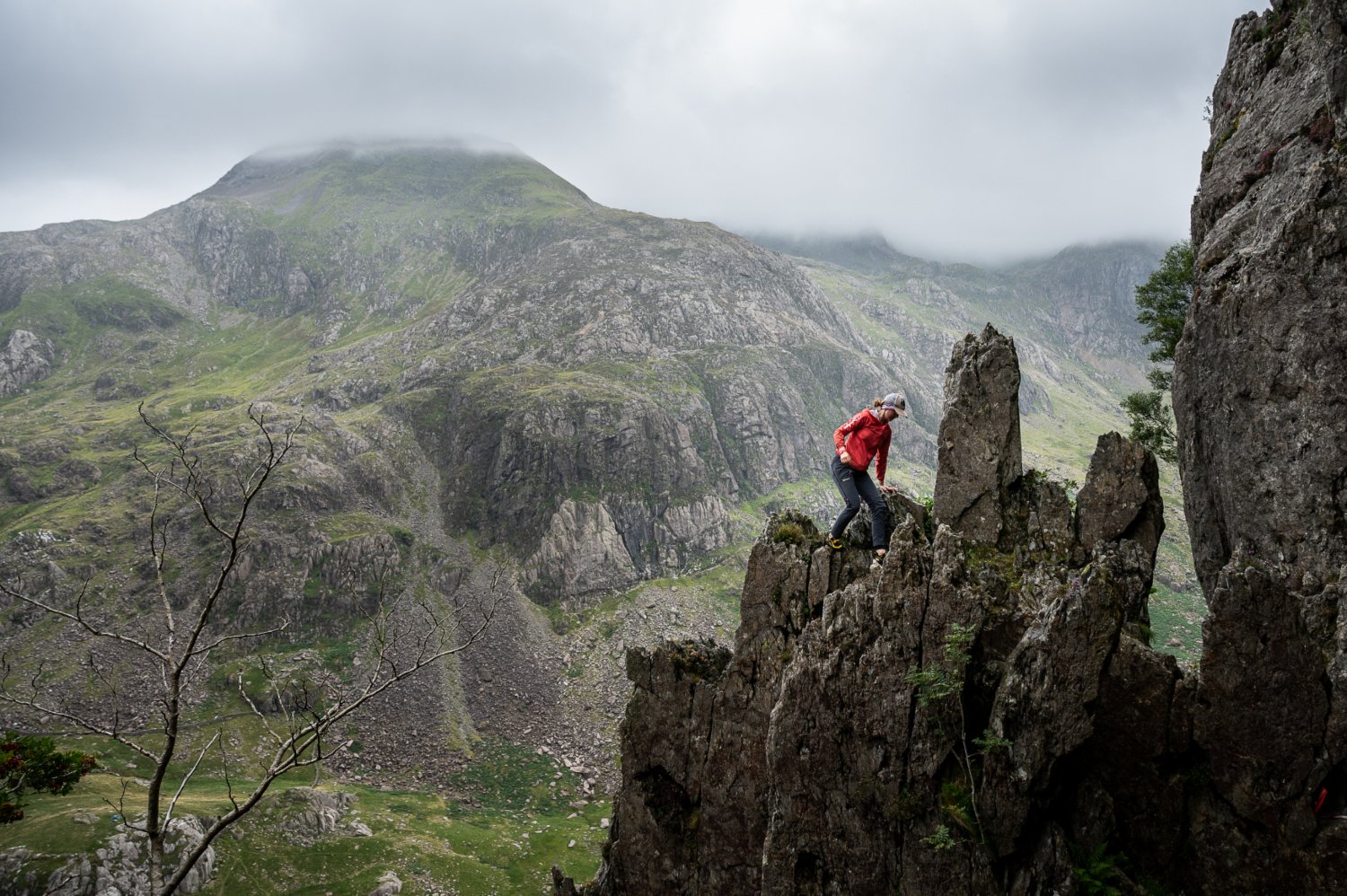 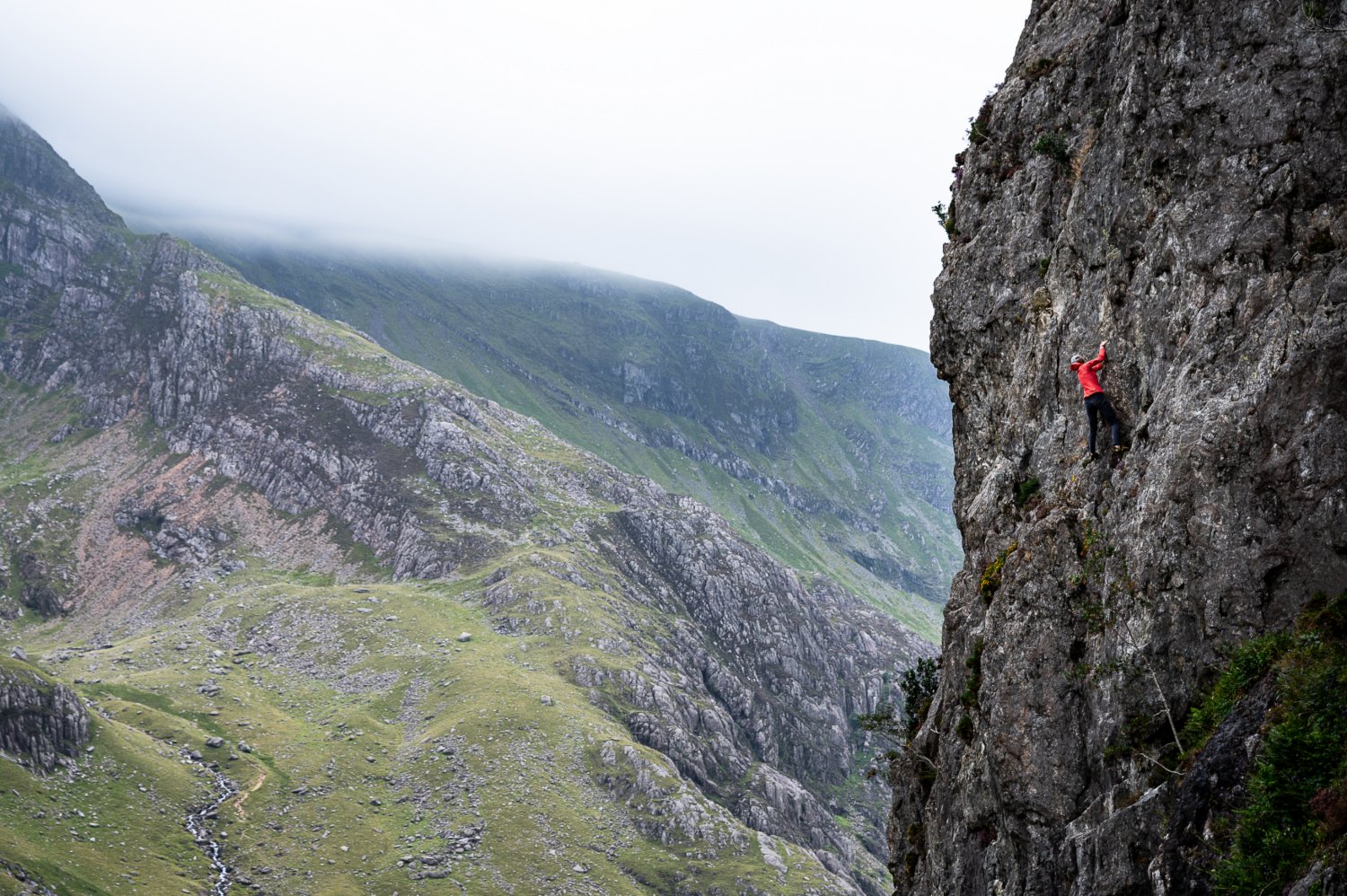 Main Wall on Cryn Las is a big mountain route with a big walk-in, and I was not up for soloing it in the wet. Marc (understandably) wasn’t particularly comfortable with the idea of climbing it in such conditions, so we enlisted the help of James Mchaffie, who partnered me for the six pitches of what was essentially ghyll scrambling. In truth we raced up it, and took just over an hour to top out and begin walking down. The Idwal slabs were also pretty saturated, and the three routes on there along with the two others on Glyder Fach and Glyder Fawr had to be treated with caution. Polished holds are like ice when there’s water running down them!

Great Gully was an interesting one. Gully’s are wet places at the best of times, and after our week of rain this one was particularly gopping. The walk-in was fairly substantial, and the 11 pitches of slime and jungle bashing were definitely an acquired taste. No amount of waterproofs could save Marc and I on this one, and after a few hours of slippery chimneys and muddy scrambles, we finally emerged at the top. The final Great Cave pitch was probably the most miserable/entertaining, when the total lack of light in the back of the cave resulted in me having to place gear by the light of my phone torch. That was a new one…

The highlight of the Welsh leg by far for me was the 12 pitch Avalanche/Red Wall and Longland’s Continuation up on Lliwedd. We finally got a good weather day, and I solo’d the whole thing in one hour and twenty minutes. I was a little nervous going into it, as I had heard some horror stories about loose rock and wet streaks, so decided to solo with a rack and a rope in a rucksack in case I ran into anything I wasn’t expecting (this way I could rope solo if I needed to, or bail from the cliff completely if thing’s really went south). Fortunately non of this was needed, and I had a fantastic experience weaving my way up the enormous mountain crag, with mist blowing in and out around me. I was careful with the route finding, and even more cautious with the areas of suspect rock, but in the end the whole thing was a pretty chilled out affair. Whilst the climbing itself isn’t anything special, the situation and sheer size of Avalanche make it a fun and very worthwhile mission.

All in all Wales has been tough. Conditions could not have been much worse, but there is light on the horizon, as we seem to be heading into a week of good weather in the Peak District. Against the odds, every climb has been completed, and I for one am seriously looking forward to some short grit routes and sunshine!