‘My bags are missing.’

It was not the best possible start to the British Far West Nepal Expedition 2015.

Miraculously Paul Ramsden’s missing bags appeared on the next flight but by this time we were late and our driver was fretting about driving to the delightfully named town of Nepalgunj in order to catch our meticulously pre-booked flight to the airstrip at Simikot.

‘I’ve never driven through the night before’ he explained.

I couldn’t ever recall having a driver that spoke good English before and contemplated that this is not always a bonus.

‘But I think we have enough fuel to get there’ he added in an appropriately reassuring tone.

This was a reference to India blocking fuel supplies to Nepal which meant that queues at the pumps were so long that it had taken him 17 hours to gather enough fuel to fill the tank.

A few hours later we were stuck in a queue behind a fatal accident in which two policeman had been squashed by an overturned lorry. As the lorry was lifted by a rather out of control JCB the throng of youths taking photos on their mobile phones was such that riot police had to be called to restore order. And then less than an hour after driving past the spread-eagled bodies laid out at the side of the road we stopped and somehow ended up joining in celebratory dancing at what seemed to be a child’s birthday party. Despite our driver successfully completing his first night drive (with no assistance whatsoever from his lorry driving friend) we were gutted to arrive late at Nepalgunj airport. But our plane was delayed and so all was well. We would arrive in Simikot as planned.

As we waved goodbye to our driver he said he was pleased to have only dozed off a couple of times on the drive and had no idea how he might find enough fuel to return to Kathmandu.

Seldom has a trip started with such a concentrated number of ups and downs.

Our plan was to try and climb a 6,541 metre unclimbed mountain called Gave Ding in the Humla region of north west Nepal. This is not the easiest of spots to get to which is great for keeping the crowds away but does add a whole raft of uncertainties to any trip. It also means the area is relatively unexplored, so much so that the valley we were planning to visit had not previously been visited by westerners. Our decision to visit was based on distant shots from unhelpful angles and Google Earth searches. A key factor influencing us was that by setting Google Earth at the right time of day we spotted that the shadow of the north face of Gave Ding was longer than any other shadow in the area. That presumably meant it was bigger and steeper that anything else around. And an unclimbed big face in a remote area not previously visited by westerners seemed to offer such good ingredients for adventurous action that the British Far West Nepal Expedition came into being. Steve Burns and Ian Cartwright joined us, Berghaus and the Mount Everest Foundation gave support and we could but keep our fingers crossed that we had made a good decision.

With only eight people on board the Twin Otter flight from Nepalgunj to Simikot it seemed an unnecessary luxury to have an air hostess on board. Mind you she was delightfully friendly and offered boiled sweets and earplugs served in the same tray. With a population of around 2,000 Simikot is the administrative centre of Humla region. The fact that it is marked on many large scale maps of the world just emphasises how sparsely populated this area is. There are no roads and much as the straight line distance from Nepalgunj is only just over 200 kilometres the journey takes just under a week without flying. But flights are totally weather dependant and there is always a risk of being stuck for days. Roads are being built from the south and also from Tibet to the north but driving hereabouts is so tortuously slow that I guess flying will always be the only realistic access option for most mountaineers and trekkers. 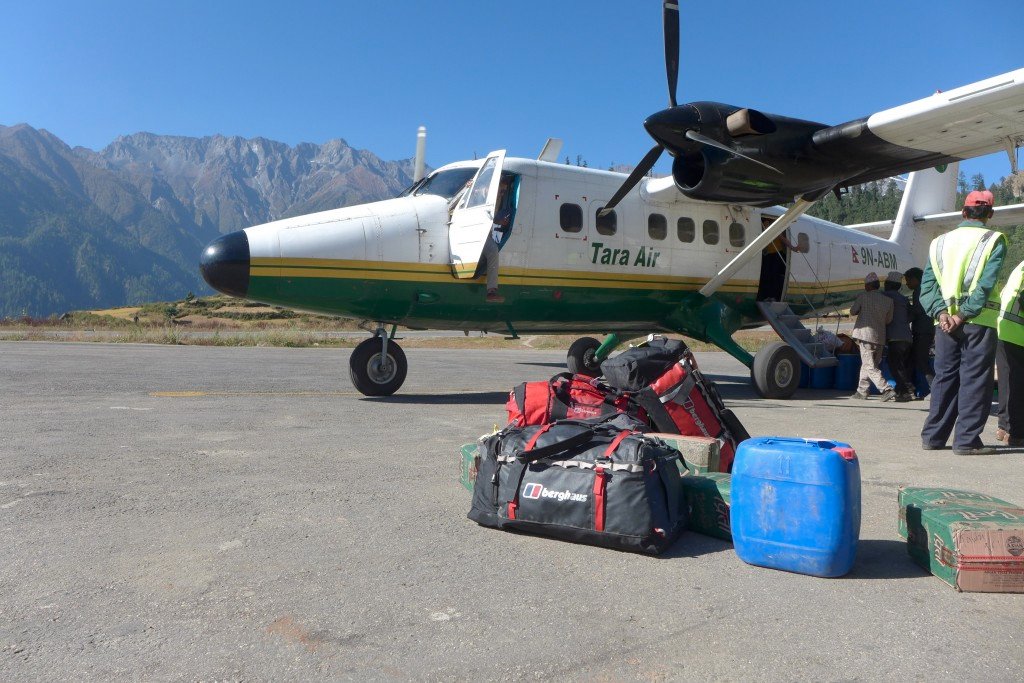 Frustratingly, even though the plane flies at little more than 4,000 metres, the carriage of gas cylinders for our stoves was prohibited. Understanding this we paid for cylinders to be portered in weeks in advance.

‘How long did it take to get them here?’ we asked our supplier.

‘Oh , not long. They came on the plane’ he explained.

Back in Kathmandu our Liaison Officer had decided that he might join us later and so our team at Simikot consisted of six of us; four climbers, our cook Prem and his son Lakpa. We also had a porter to carry kerosene and ferry kit to base camp if our mules couldn’t make it all the way. Somehow we ended up with far more mules than we needed but the muleteers did an admirable job of spreading the load in such a way that it was not immediately obvious how lightly loaded they were. 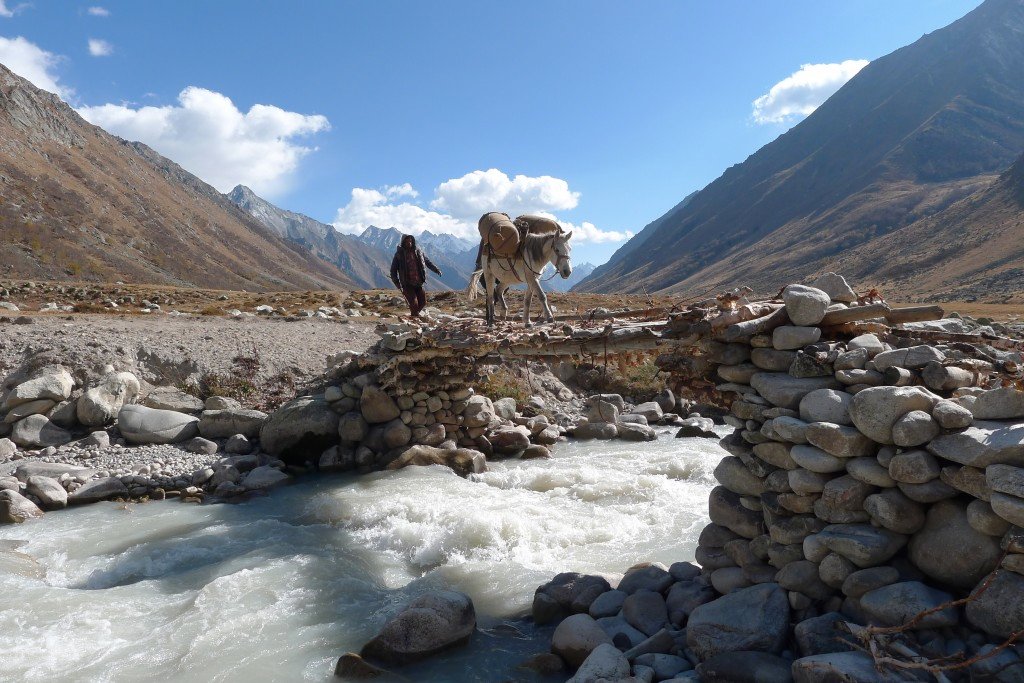 After Simikot we were to see no westerners at all. The good mule tracks of this part of the world took us through ethnically pleasing villages on day one and occasional shepherd huts on day two. After day two we were to see no more humans at all until the walk-out.

It was on day four from Simikot that the real adventure started. This was the day we left the main valley leading to Tibet and turned into the left branch of the Lachama Khola where we hoped to have a base camp by a prominent lake we had spotted on Google Earth at 5,000 metres. Our friends Julian Freeman-Attwood, Nick Colton and Ed Douglas had been up the right branch in 2011 but we had no real idea how far we might be able to make it up the left hand branch. It didn’t take long for us to find out.

‘The mules can go no further’

Prem was interpreting for the muleteers who were acting in a way that left little room for doubt.

We were at about 4,500 metres and a long way horizontally from our intended base camp site. Using our one porter to ferry loads was out of the question. Prem and Lakpa offered to help but ultimately we decided it would be easiest to have our base camp where we were.

And so after a day sorting ourselves out at base camp, and nine days after leaving the UK, the four of us ventured into the upper valley to find out whether our gut feeling had been right and exciting objectives were to be found here. After all the planning, preparation and anticipation it was a tense day.

Learn more about the epic five day climb which led to the first ascent of Gave Ding in the second part of Mick Fowler’s two part series.

How To Climb an Overhang