Earlier this week Berghaus athlete Sir Chris Bonington joined a host of celebrities and members of the royal family as part of a historic descent of The Shard in London.

The abseil was in aid of raising money for two worthy causes, the Outward Bound Trust which is supported by Berghaus and The Royal Marines Charitable Trust Fund.

Here Chris gives his thoughts on the abseil:

“It was a fantastic experience.  The view from the top of the Shard is amazing – the whole of London is laid out before you but everyone, including me,was quite gripped up immediately before taking off down, but once started, it was brilliant and very easy.  I just had the top slot which was a 75m abseil down the glass of the Shard to where they had taken out one of the panes and you were pulled in.  It was very different from going down rock  or ice, particularly as we were using a caver’s rack, to diminish friction and heat.

It’s certainly something that I shall always remember and my respect goes out to my colleagues many of whom had never abseiled before – it was one hell of an abseil for a first one!!!! Even though  they did have a practice on a small tower. We also raised a lot of money – over £1,000,000 for the two charities – Outward Bound and the Royal Marines Trust.  They both do terrific work.  To learn more go to www.descentoftheshard.com/the-descendants.

You can also make a text donation by texting “DROP87 £3 (or whatever you want to give)” to 70070. It’s in a really good cause, helping young people, many of whom come from disadvantaged backgrounds, gain confidence and fine themselves – and also to help our gallant marines who have been injured in combat rebuild their lives.” 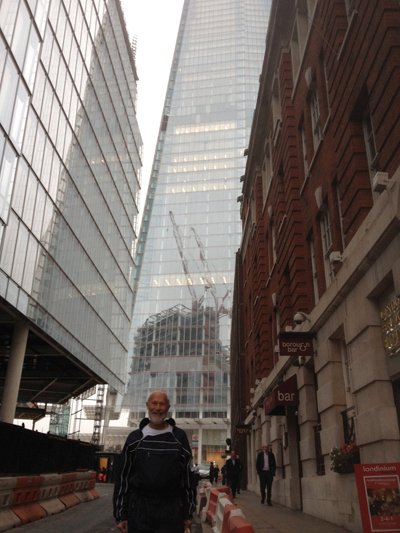 What Makes a Berghaus Jacket Interactive?