Berghaus athlete Leo Houlding shows us the true meaning of an ‘epic’ with his latest climb of the South Face of the Marmolada, the highest mountain in the Dolomites. Buckle up and read his account of how the day unfolds...

“All of the routes on the South Face of the Marmolada are serious undertakings. It’s bigger than El Cap, a long approach, an involved descent and is not to be underestimated,” I told Waldo over the phone a few days prior to his arrival.

“I’ve never climbed there but normally you hike in the day before and either sleep in the hut or camp near the base to get a super early start. You can do it in a day but there’s a killer bivy ledge just over half way that is commonly used on the harder routes”, I continued.

“Problem is the only decent day of weather is the day after you arrive, you don’t land until 10pm and it’s a 3 hour drive…. We could just go for it from the Van in a oner but we might be setting ourselves up for an epic?” I professed.

“We could just go for it from the Van in a oner but we might be setting ourselves up for an epic?”

After 2000ft of sustained, runout climbing we arrived at the spacious, perfectly flat and well sheltered bivi ledge as the layered vista of the Dolomites abrupt peaks glowed in the glory light of the setting sun. 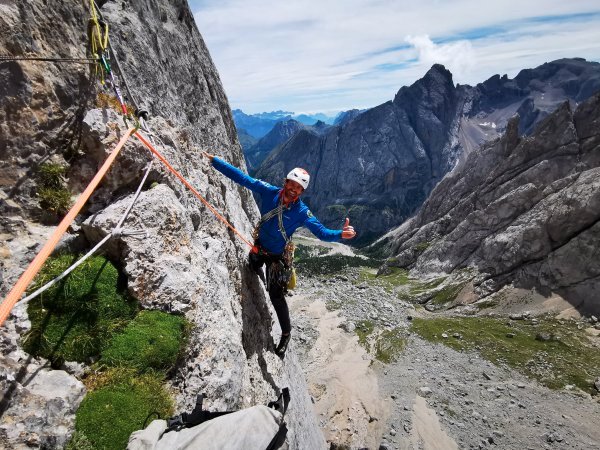 “Sweet bivi spot! Just in time to watch the sunset! Crack out the stove, cook some dehy and snuggle up in our toasty sleeping bags! I love wall bivys, SO glad we opted for a two day ascent!” sniggered Waldo, his words draped in irony for he knew as well as I that in fact we had not heeded my own warning. We had no stove or bivy gear and were far from the top!

On the drive from the airport we had discussed options. The Dolomites is renowned for unstable summer weather and August 2020 was no exception. Daily afternoon thunderstorms had been compounded by a torrential weekend rainstorm rendering the upper sections of our alternative objectives, the classic North face routes of the Tre Cime di Lavaredo, too wet to enjoy. There are plenty of other worthy climbs in the region but I’d wanted to climb the Marmolada for years, in particular a route called Tempi Moderni, Modern Times in English, that my late friend, the uber talented Hayden Kennedy had described as one the best routes he’d ever climbed.

Against my own caution I talked myself and Waldo into the Marmolada. Knowing we wouldn’t start climbing until very late we decided to attempt an easier route and to go for it in a day.

We are fast climbers we told ourselves; armed with half a dozen micro-traxions and a tiny load we intended to simul-climb extensively as the route would be well within our abilities.

After a few hours of marching uphill we were on the final approach to the giant wall. Different geologically to the rest of the Dolomites it is an immaculate sheet of limestone, and one of the finest and largest to be found anywhere. The clean sweeps of pale stone that form the intricate and complex line of Tempi Moderni caught my eye and at the final moment in a fit of wreckless psyche I convinced Waldo we should go for that route instead, even though it was now gone 10am. Ideally we should’ve started climbing before 6am.

The first pitch is the hardest of the route. Although it is only graded French 6c+ the Marmolada grades are notoriously sandbag and the protection far from inspiring. 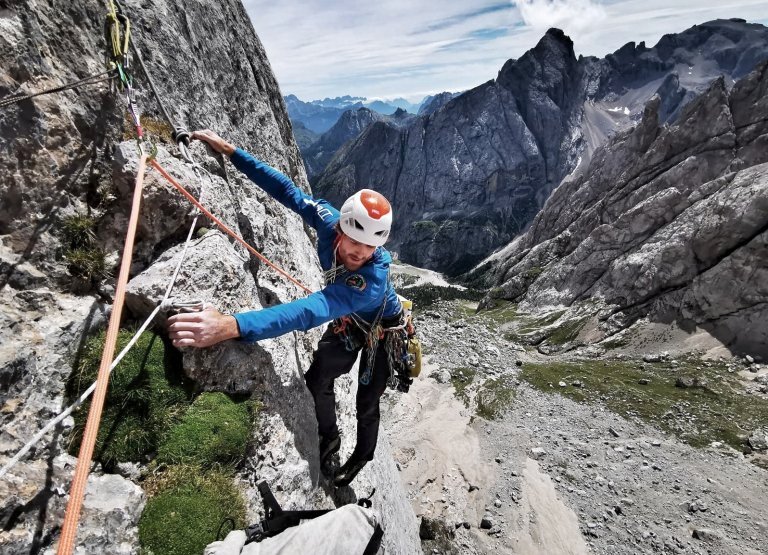 I set off full of motivation, knowing full well we were very likely walking into a minor epic but secretly excited for one after the long, lethargic months of lockdown. About 20ft up I placed my first gear and contemplated the first hard move. Moments later, I found myself hanging on the rope having slipped off and blown my onsight barely having left the ground. 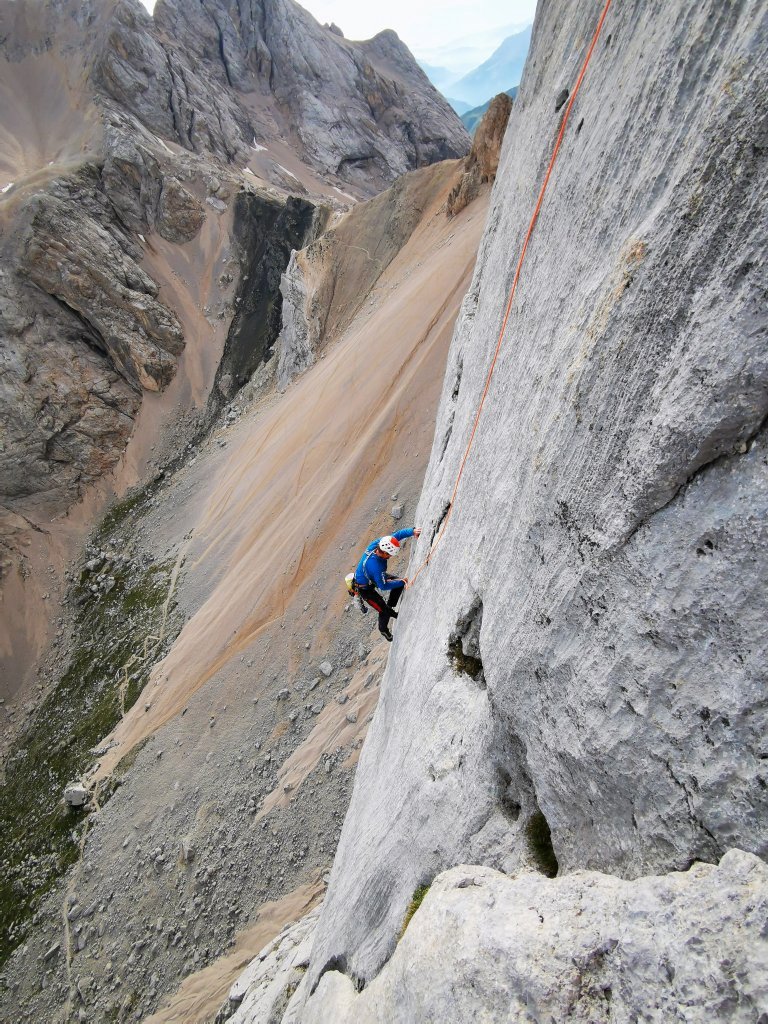 I continued without resting up moves I found surprisingly hard, climbing past wobbly insitu pitons and the tell tale sign of bail ‘biners, until a flash pump, born of six weeks off the rock on family holiday, suddenly gripped my forearms with sickening intensity. Barely 50ft off the ground I had to sit on the rope for close to 15 minutes to regain the use of my arms and continue. It was past 11am when Waldo joined me at the first belay, impressing me greatly by seconding clean having gained two grades since we last roped up before lockdown. 1 pitch down, 27 to go, 9 hours of daylight remaining… 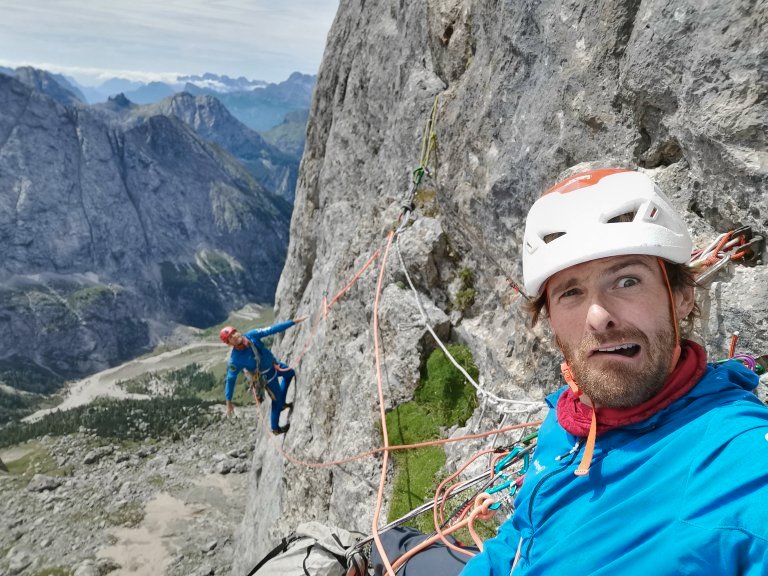 The sensible, even sane thing to do would have been to retreat there and then before the forthcoming long, traversing pitches led above great overhangs below to create an extremely difficult descent. But reassuring ourselves that we had head torches and most of the climbing was much easier we pressed on, consciously courting a ‘memorable experience’ . 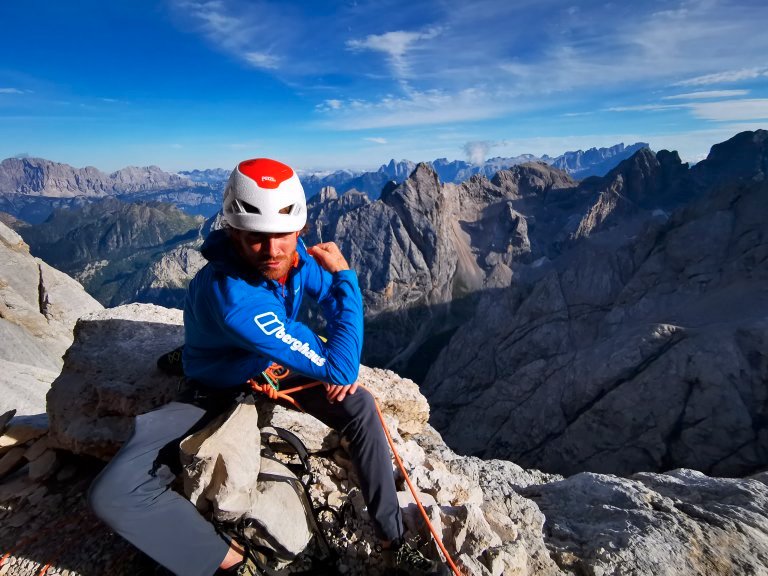 Although we made good progress on long sections, route finding mistakes resulted in several extra pitches and consistently more difficult than anticipated climbing saw us arrive at the halfway bivi ledge at sunset. 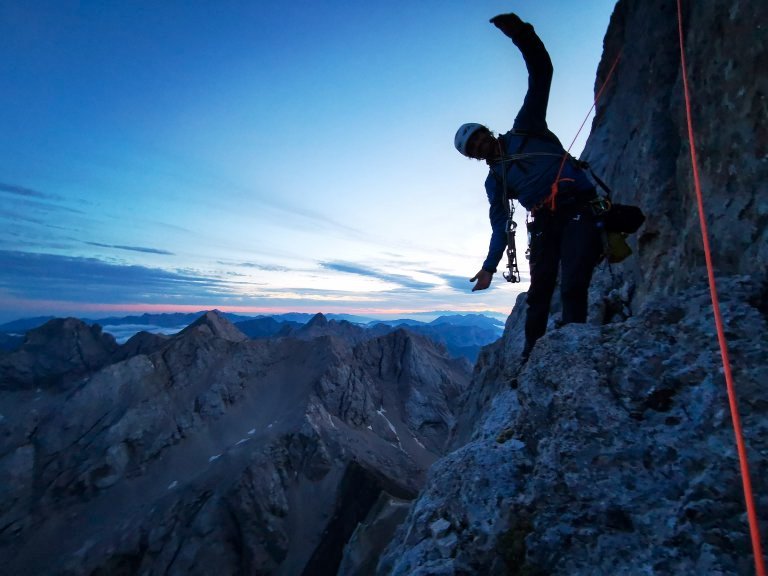 We continued, cranking out another one of the hard pitches fast and then simul-climbing frantically up easier terrain in the stress of the engulfing darkness. Regrouping beneath a huge roof we relaxed into the now complete darkness.

The anxiety of encroaching dark gave way to the acceptance of a long night. Exposure was replaced with a small patch of torch light sufficient to see hand and foot holds, but not for long distance route finding.Using this opportunity of a big climb in a more accessible location than on a remote expedition, we were testing various ultralight kit and strategies. 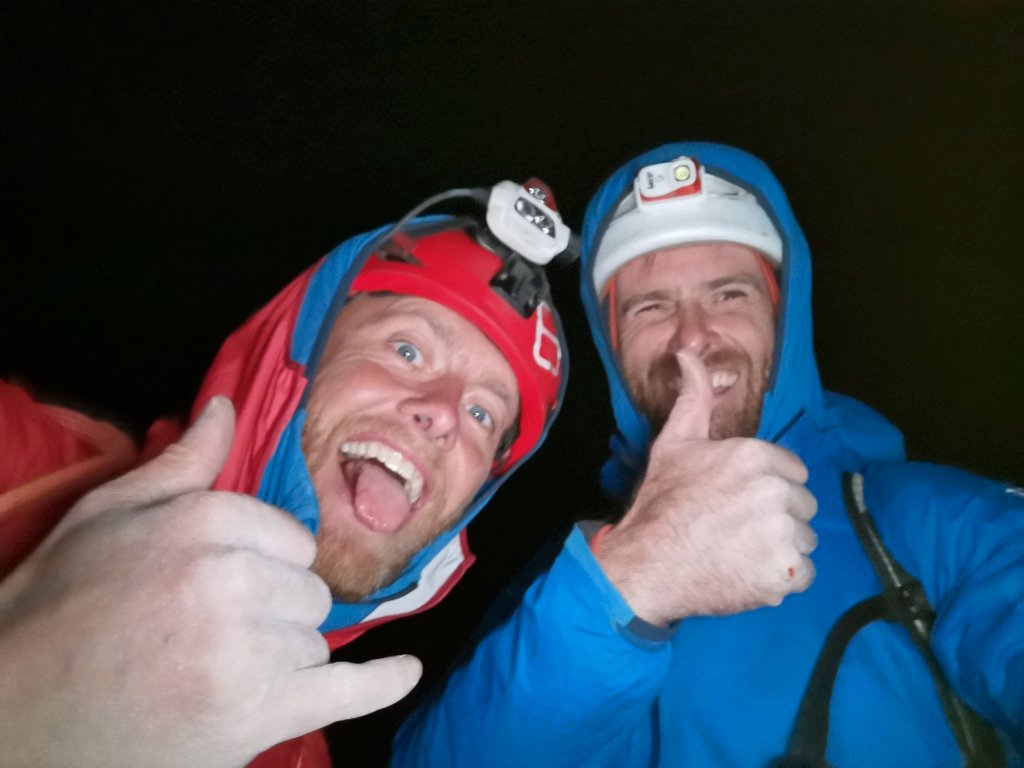 I wore a “G-string harness”; weighing in at just 140 grams at the complete sacrifice of comfort I paired it with my revolutionary “suspenders”, a minimalist set of barces with built in double gear bandalier to hold up my heavily rack laden, string harness. I’d also opted not to bring my trusted favourite Hypertherm insulated jacket, committing instead to a proto-type, air-light layer of a new fabric called alpha direct, paired with the awesome Hyper 100 wind / water proof layer. Although late August we were above 10,000ft and the night was cold. Thankfully it was eerily calm and my featherweight experimental attire packed just enough punch to stave off the Alpine chill, though my hands were soon numb with cold.

Convinced I had managed to fit the route description to the terrain ahead, I set out traversing through the grooves with more difficulty than the grade would suggest, but after some 20 pitches of grossly undergraded climbing this came as no surprise.

It wasn’t until I came to another prominent roof some way higher that I realised we were way off our intended route. In the haste of encroaching darkness much lower I had taken a wrong heading, simul-climbing for hundreds of feet in the wrong direction before forging a possible new pitch through the roof.

Thankfully we found pitons marking a different route. Although we didn’t know what we climbed we knew it would eventually lead to the top. 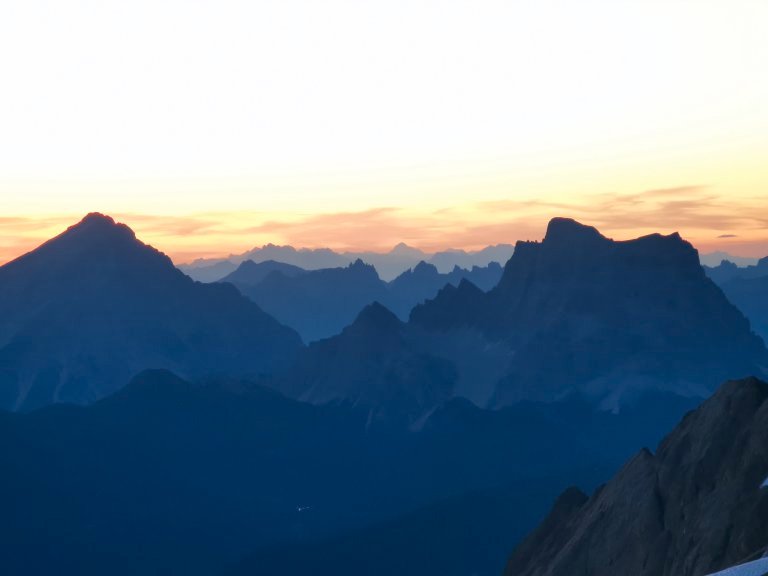 The next few hours brought the familiar scary but stimulating, fearful but fulfilling intensity of a ‘near epic’ never quite straying into outright gnarl; we were nonetheless committed and on the edge of a truly serious predicament. A minor accident, loss of bottle or lull in energy would result in a very uncomfortable, cold night at best and at worst a very bad situation.

But accompanied by the ever cheerful and jocular Waldo, a good man with whom to share an epic, I thoroughly enjoyed the eight long pitches of delicate movement through darkness and thought provoking, unsafe leading until finally we reached the summit around 1am.

Unkeen to find our way down the glacier in the dark we decided to shiver out the remaining night in the cable car station at the summit until the first lift down in the morning. On the way we stumbled across a couple of very dry, large, old logs half buried in scree. To my surprise we were able to light them with just a few tissues as kindling, the warmth of their flames staving off the worst of the cold until day break. 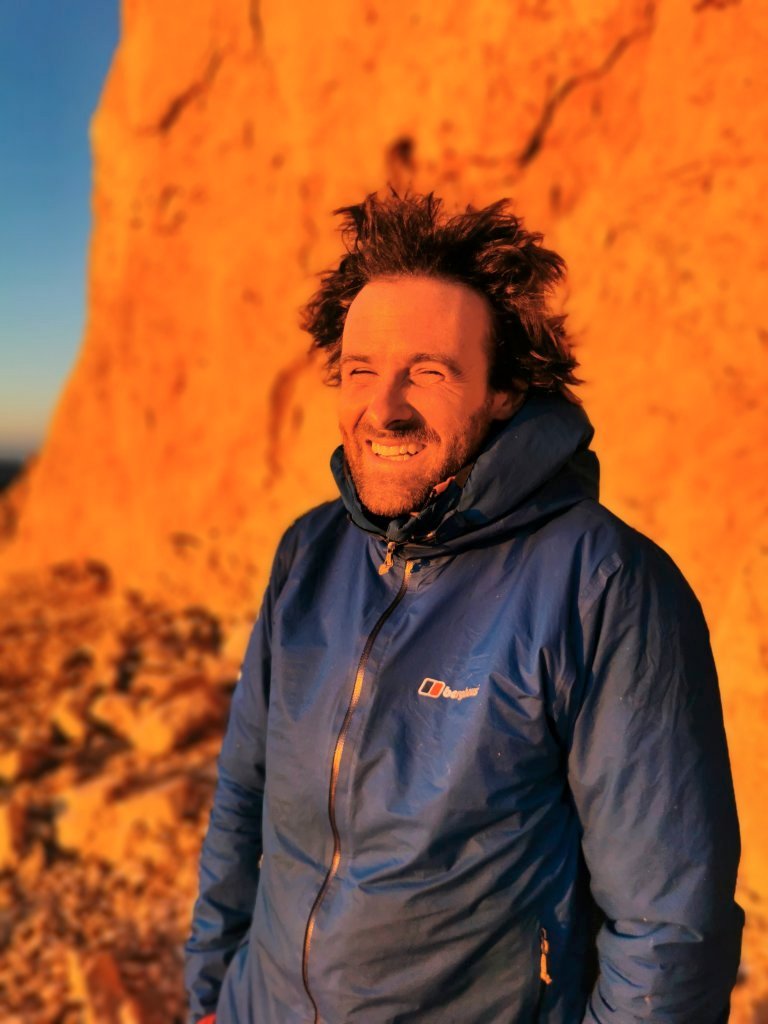 Stumbling back to the van some 30 hours after leaving it, we reflected on the well informed set of questionable decisions that had led to precisely what we had anticipated, concluding that we had in fact made the right choices, sharing an adventure into the night we would remember for a lifetime, relishing the hardship, discomfort and fear of the night now that we basked in the comfort and warmth of day. 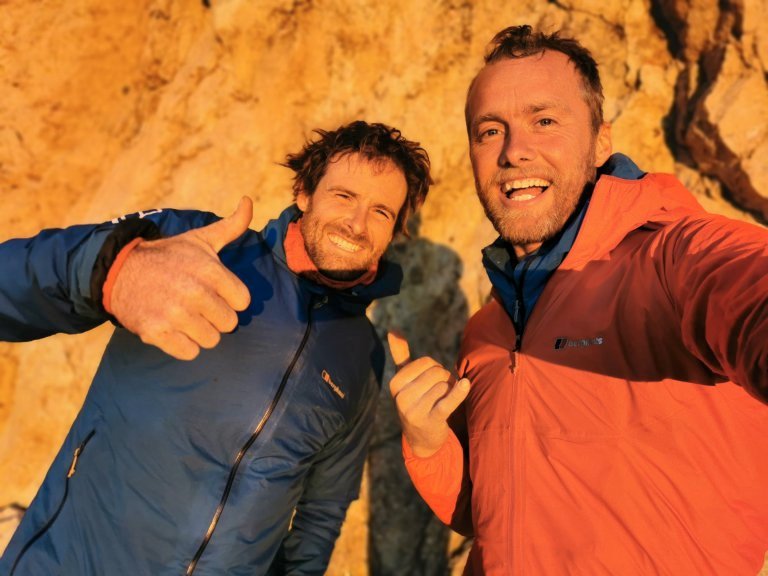 We were reminded that the best experiences are always the hardest and that the casual, fun days that go according to plan, ending early with bar meals and beer are never the ones about which we will reminisce in years to come.

Check out the video below for more Marmolada action…

Like what you’ve read? We’ve got a load more Leo and Waldo antics for you to catch up on over a brew here.

And, if you fancy giving them a follow, head to their Insta pages @leo_houlding and @waldo_etherington