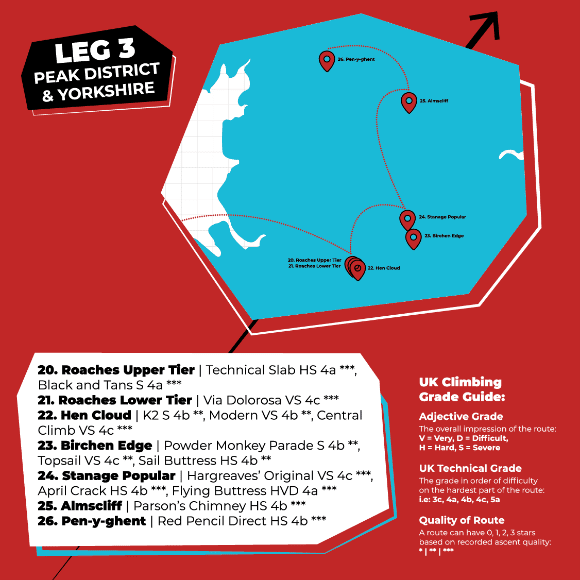 I should probably not have made the mistake of assuming that the Peak District would be the “easy” part of this tour. However,  after over a week of wet Welsh mountain crags, there was something particularly appealing about a good weather forecast and 20 metre grit routes. I knew something was wrong when I started to feel a bit weird on the cycle over to the Roaches, but I wasn’t quite prepared for the 12 hours of on and off vomiting that followed. I have to say it’s not really what you want in the middle of a very energy dependent challenge!

Fortunately, I did recover quite quickly, and despite climbing the routes like a sloth, I did eventually get up them. The Roaches is somewhere I’ve spent a little bit of time at over the years, and it was nice to come back without the pressure of doing a hard route, and enjoy the classics that I’ve always seen but never got around to climbing. The two routes on the upper tier (Technical Slab and Black and Tans), were particularly good, and Via Dolerosa (which weaves an unlikely path beneath an enormous roof) was probably the most exposed line I’ve ever climbed on grit.

Over at Birchen Edge the three routes (or were they boulder problems?) I had to do were extremely short, but somehow all packed a punch anyway due to weird hand-jamming starts, blind roofs or super polished holds. I didn’t know polished gritstone was a thing until recently, and I’m not a fan! 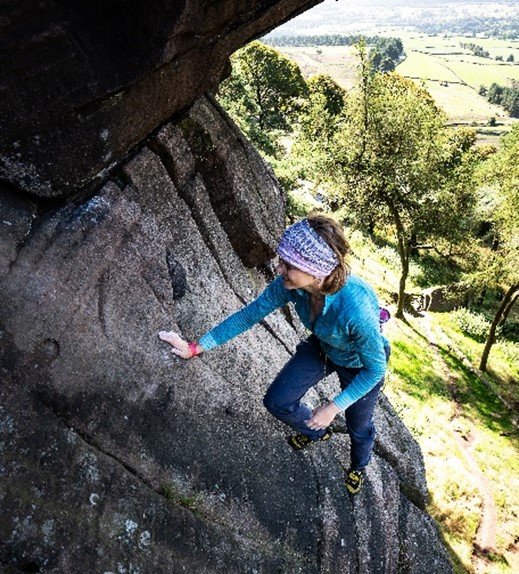 Anna tackles a steep climb in the Peak District

We eventually ended up at Stanage, with the highlight of the crag for me being Hargreaves Original – a fairly long climb for grit, where you have to carefully balance between sloping breaks that are never quite jugs, all the way to the top of the wall. April Crack and Flying Buttress were both nice, easy fun, but the same could not be said for the offering at Almscliff – Parson’s Chimney.

By the time we got to Yorkshire I was still feeling a bit rubbish, but I didn’t want to be beaten by a HS chimney. During the walk up to the crag there was some complaining about why on earth this climb was deemed the classic, when according to Marc (who has climbed at Almscliff a lot over the years) there were many great VS face climbs right by it. I’m not much of a fan of chimneys anyway, but this one looked particularly unappealing, covered as it was in green slime. Just wanting to get it over with and go, I stepped off the ground and immediately started having a hard time getting over the first bulge.

I managed it, but then found myself quite high up and in a position where I knew I was going to have to bridge my whole body across the gap of the chimney to progress. What followed wasn’t one of the more graceful moments of my climbing career, but with a bit of wriggling and a lot of cursing I made my way cautiously to the edge of the chimney, and with a sigh of relief managed to climb out and over the top of the crag. I have to say it wasn’t one of the better climbs of the trip for me, and I have learnt my lesson to say away from gross chimney pitches when I already feel ill! Once Yorkshire was completed we ended up back where we had started exactly a month ago – The Lakes… 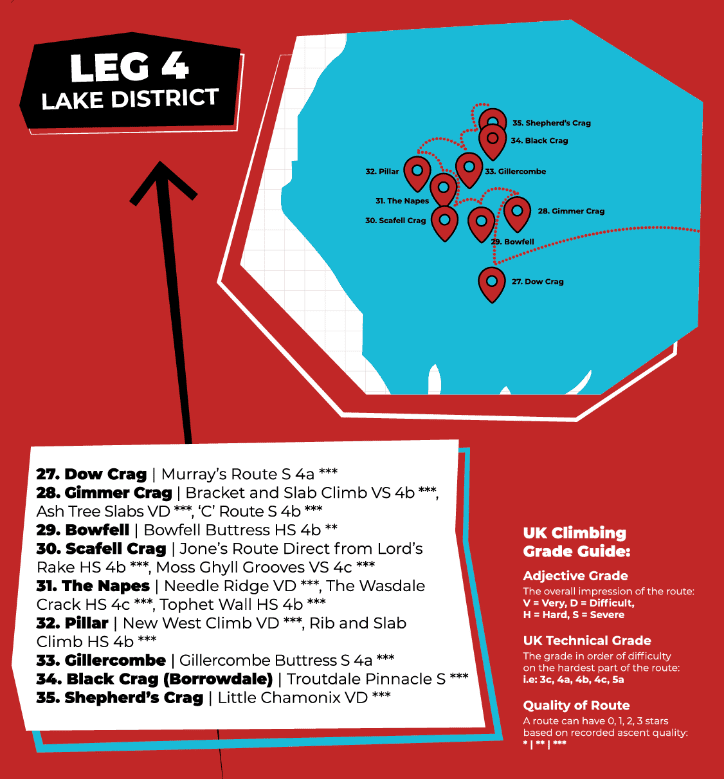 The Lakes is my home. I’ve lived there all my life, and the mountains and mountain crags are all pretty familiar to me. After arriving from the Peaks and having a rest, I set myself a goal of getting everything done within 48 hours – something I achieved, and along the way I got to experience a bit of a personal victory too.

I’ve headpointed some fairly hard trad over the last few years, but in many ways I wouldn’t consider myself a particularly bold climber (I know that sounds like a massive contradiction given the amount of soloing I do). Any of my regular climbing partners could tell you that if anything, I’m overly cautious, and I have to admit that I was a bit scared of tackling the entire Lakes round alone. Technically these climbs should be a path yes, but when you add weather, fatigue, route-finding, and often climbing with a pack on into the mix, they can sometimes end up feeling a little harder. I would have wanted a partner to at least move together on climbs like Moss Ghyll Grooves and Tophet Wall this time last year, but with everything that has happened over the last month, my capabilities with this kind of thing have significantly improved, and I felt that I could give it a shot alone.

My hopes came true high up on Gimmer. Last time (and the only other time) I had climbed Bracket and Slab, moving together with a friend, I had dithered whilst working out where we were going, and second guessed a lot of my own decisions. Now I worked out where I needed to be almost instantly (I can honestly say that I couldn’t remember a thing about it), and climbed to the top of the enormous crag within ten minutes, feeling light and super confident the entire way. This mindset made me a lot less worried about the two Scafell routes, and a few hours later I was calmly picking my way up the Pinnacle, then the middle of the awesomely exposed main face. Tophet Wall was much the same, and as if by magic the big three of the Lakes (in my mind at least) were over. 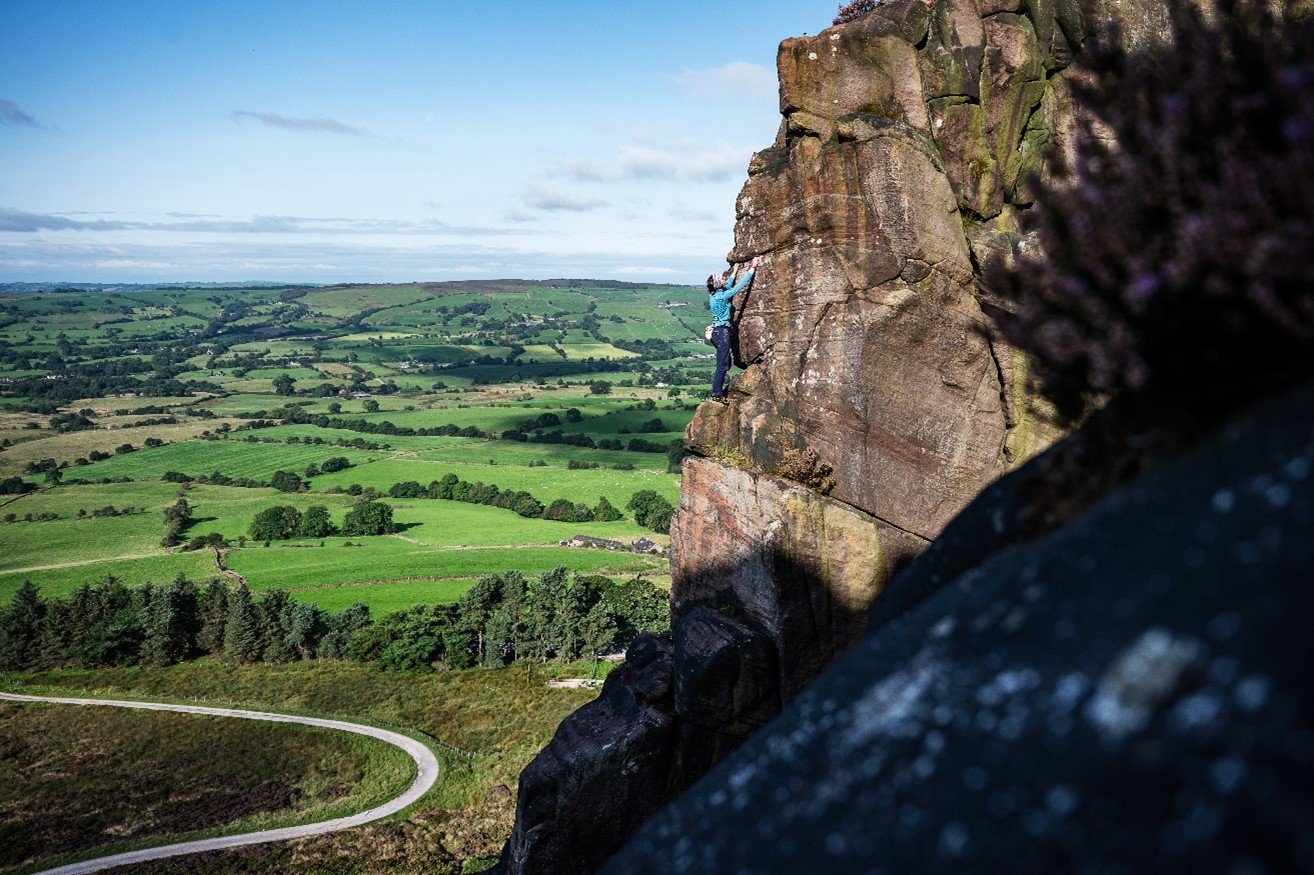 I think it’s probably good to share some of the internal thought processes on these diaries instead of just an endless list of climbs. I feel like I’ve learned a lot about soloing over the past few weeks, and when I say that I’m now attempting climbs alone that I wouldn’t have done before, it’s not because I’m becoming bolder, or in anyway reckless, but because I feel a lot more knowledgeable when it comes to looking after myself high on an unknown rock face. Route-finding is the big one. Often on these classic climbs it’s simply a case of following the polish, but on the bigger cliffs and less frequented climbs (Avalanche on Lliwedd for example), it’s easy to get lost, and that’s a really effective way of getting into trouble.

Scoping the line out from afar and not just questing up any old line of weakness, but taking the time to make sure you’re right on every single pitch, is the way to go. I’ve also found that simply carrying enough kit to rope solo if I need to is a great thing for the mind. I hardly ever use it, but having the option (should it randomly start raining, or something else unexpected happen) always feels good. Soloing can be serious, but on easier terrain with the right approach it doesn’t always have to be a black and white “you slip and you die” scenario. I’ve solo’d a very large percentage of the climbs on this trip so far, and struggle to think of a moment where that’s ever been the case.

Back to the Lakes, the rest of the climbs there all passed without incident. Pillar Rock was a long and irritating detour, but it’s a beautiful place, and the two climbs there were high quality enough for me to resent the huge walk-in slightly less. Gillercombe Buttress was a highlight (I’d never done it before), and I thought for an easy scramble-type climb it really doesn’t get much better. My legs were pretty shattered after all the mountain hopping, so I took a couple of days off before setting off on the fourth and final leg of this tour. Scotland is I’m sure going to be the final exam in terms of soloing big, scary mountain routes, but I’m ready to get up there and get stuck in!